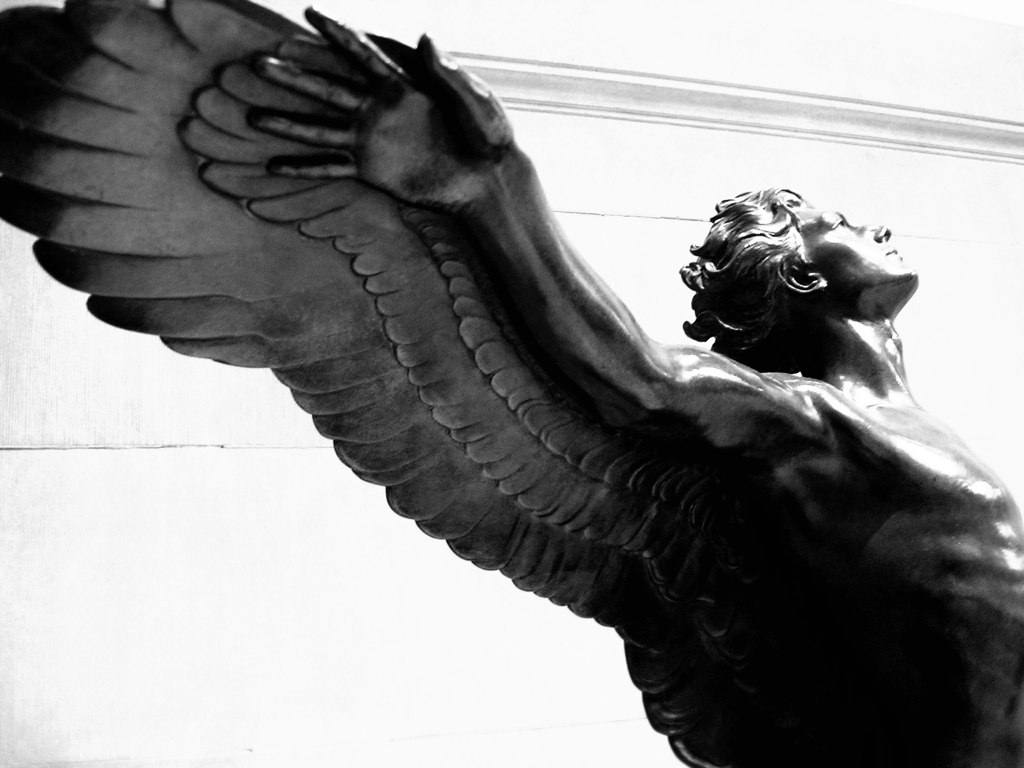 If we are going to enter this new year in any form at all, then it should definitely be one where we are prepared to seek out and accept challenges, no matter how outlandish or difficult they may appear to be. We should set aside our worries and our fears, leave behind the belief that we are unworthy or incapable and stretch ourselves out toward the heavens of learning – if you will – whether we succeed or not, or the hell of failure through not having at least tried. A challenge is to take on something we have never achieved, perhaps never even tried before: something which is going to test us to the utmost, strain our very existence in a manner we have never dreamed of before. Or, perhaps, we are the kind of person who throws a challenge out into the wind, knowing full well that hardly anyone will be willing to take it up, willing to step forward with head held high and bring us out onto the field of (intellectual) battle. But, as Gomez Addams proudly states, finger and head held up to the fading sun, as he faces his day in court: I am that fool!

That is: I am the sort of person who takes up a challenge, especially when it has anything to do with words, with reading and writing, with history, philosophy, myth and legend. If someone wanders into the room – or my sphere of attention would probably be more accurate, as most challenges come through social media and the internet these days – and mentions some name which I know – such as Icarus – or an event, or even a date, then my mind immediately wanders off into thoughts surrounding that small word, piling information, memories and sensations together as if no one else is there, as if I have been given a task to complete within myself. It is a strange phenomenon, and one that I hated as a child: a word and immediate association. Amusing, then, to see your word association of Kings, Queens, Guillotines which, as you can now imagine, immediately brought me associations with such writers as Dickens, with Germaine de Staël, with others involved or linked to the French Revolution; linked as so many who were not there, such as the historian Thomas Carlyle in the nineteenth century, or the historian Rachel Hewitt today, but know enough to bring a time, and a place, to life with their words, their writing.

And, of course, the Renaissance era, as you mention, with its wonderful works of art as much as the persecution which followed not believing in one dogmatic belief or another, one strict religion ruled over by a few which, had it not been, would have left us without some of the most beautiful works of art and, gradually, the Humanist tradition. We might even have missed out on the letters Markus Tullius Cicero write, especially to his friend Atticus, but for the passion of the man known as the Father of Humanism, at least coined as such by Georg Voigt many decades later, Francesco Petrarca (Petrarch) whose love for the political and legal writings of Cicero led him, eventually, to find those letters long believed lost and bring them to the public view.

But, of course, every up side has its down side too, and we see not only physical strife in these fascinating times, not only the deaths of thousands of unbelievers, ardent believers and bystanders, but also the controversies which arose over who was the better writer – following on from a tradition that said writers should, or should not, write in the Latin style of Cicero – over what constituted art, and the beginnings of what we know as the Rights of Man.

Most people know of Icarus, of course, because his name has been burned into their consciousness by the tragic tale of his flight, his approach to the sun, and then the fall from on high. Sadly they leave out the tale of Daedalus, who I find far more interesting, the father of Icarus, and builder of his wings, the man who accompanied him but who, going on to far greater things as he fled one regime after another, flew with him and watched, helpless, as his son plummeted into the sea.

Often we only see a small part of the whole, the central theme, perhaps, but miss out on many of the delicious details bejewelling the edges. The tales told in the dark of night to warn, to inspire, to teach, but not quite accepted as the truth, as the way, for those who compiled the books, the reference works, the scripts from which we now take our classical education. Many are still coming to light, and it is a marvel to watch archivists in Harvard, or at the Beinecke Library as they work on some old scrap of paper, decipher what was written there thousands of years ago, and then link it up with knowledge already gained elsewhere to make an almost complete story. Or, at least, a story which might inspire others to continue this laborious work of discovery. So Daedalus, as an example, appearing as a peripheral character, two small mentions, in that magnificent work Aeneid by Publius Vergilius Maro.

I am he who once tuned my song on a slender reed, then, leaving the woodland, compelled the neighbouring fields to serve the husbandman, however grasping – a work welcome to farmers: but now of Mars’ bristling…

hinting here, in an early foreword to the work, at the humble beginnings of the narrator, perhaps, which, later, came to greatness. A side story, a little thing which other people do not see, do not care about but, without which, there is no story to tell.

There are, though, so many challenges which can be taken up, with yourself and no one knowing about it, with other people as witness or participants. My own challenge began a year ago when I took up paper and pen once more, and began writing to a wealth of people all around the world who, one way or another, had shown me something which sparked my interest. My challenge was to get in touch with all these people – an old-fashioned way, I must admit, but it works for me – and try to engage them in conversation about all these small, sidelined things which make life so wonderful; to learn about them and their world through their eyes, their thoughts, their daily experiences. Can you imagine such a thing working? Can you imagine sitting down and writing over two hundred individual letters to people you have never met in your life, who you know nothing about and who do not know you and then, if they reply – and there is never a guarantee – writing again? Can you imagine what it was like in that period of time that you so enjoy, the fifteenth century and later through to the eighteenth – where my real interest begins again – when a letter might take a month or more to be delivered? In my favoured time, as a letter writer, a letter a day between married couples who were separated for some reason was a demand of society; the better social classes, that is. Even Sherlock Holmes – who many people still write to at his London address – commented to a street urchin once, that he was to take the note he’d written for a penny, and bring the reply back forthwith.

The truth is, the first letter is hardly a challenge at all. The writer can note down anything they wish, and no one need be any the wiser. But when a reply comes, and now and then such a strange thing does happy, then the challenge begins. Your challenge is for people to write about this list of interests, or demands perhaps?, on personal opinions who, presumably, hold. But is it not a bigger challenge when someone writes back and says they disagree with you, and presents an argument for why they hold a different opinion? I once, many years ago, came across a New York-based professor, teaching, who stated that she never read a particular periodical, because the opinion this organ of the press held was different to her own. How did she discuss with her students? What were the debates like if she was incapable of rising to the challenge of reading a contrary viewpoint? How biased her students must have been, at the end of each semester, having only seen one side of the coin.

Let me, as an example, take one of your opinions: the greatest mistake is giving up. Now, if we were to debate this one point, I would have to take the contrary view to your own. I would have to say giving up is not a great mistake because this is too much of a generalisation. Not knowing when to stop can be seen as giving up. Going back and starting afresh can be seen as giving up. It is like the scientist in his laboratory who is trying to find a cure for something, and each and every time he does an experiment it fails. He doesn’t give up, even though he is doing the same thing over and over again. But how can he expect a different result? Why does he not give up, begin afresh with a new approach? The destination is the same, but the route followed is a different one.

I am, of course, being pedantic. I do know what you mean by giving up on a dream or a chance when there is a chance, when hope and the means are still there, simply because it seems to be too hard, or something similar. But, in a debate, we do tend to twist things a little, and words, the expressions we use, how much they encompass, are very important indeed. So there we have a new challenge, as if writing back to me were not challenge enough: thinking about the idea of when it is right and when it is wrong to give up. I am sure many philosophers would love to be able to dive into such a question, and would come up with a whole mess of long words and explanations which boil down to nothing at all. And, yes, I do appreciate that these are clearly shown as being your personal opinions, not ones which you would foist on another as their way through life, as a dogmatic guide to how they should live their life.

Like Daedalus, who we only really hear about because he is mentioned as being the father of Icarus, and responsible, in effect, for his death, there is more out of sight, more than hasn’t been said, of that I am sure. Is this a challenge worth rising up to?