Home / Personal Letters / As We Wish To Be Seen

As We Wish To Be Seen 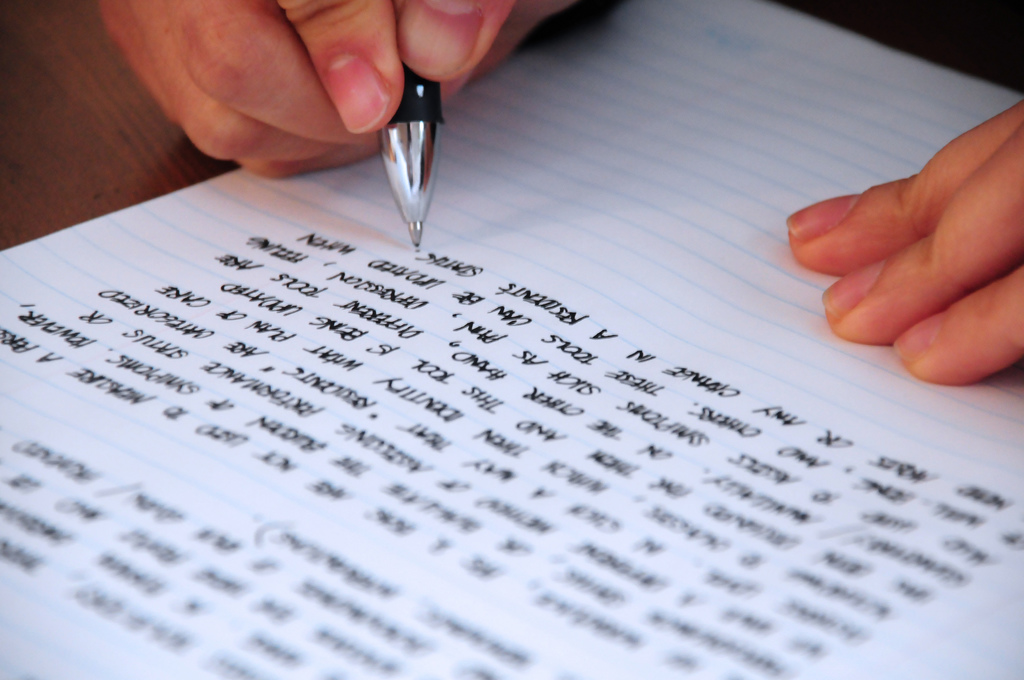 I’m not very good at describing myself. Whenever we take time to put down into words who we think we are, it is always a mix of fiction, of wishes, of impressions we want to convey, perhaps to gain standing in the sight of another person, to impress them, to earn their respect, whether it has truly been earned or not. We describe ourselves as we wish to be seen, and not as other people see us. And if we were to take on what other people see, what other people read from our actions, in our character, through our lives, it would be a confused plot with no real storyline, no beginning and no end. No one, not even the person describing themselves, is capable of creating an entire picture, an autobiography which encompasses all that there is to know. We are there from the moment of our birth to the final breath leaves our bodies, but cannot see with the eyes of anyone but ourselves. In the same manner, it is very hard to describe another person, no matter how well you may claim to know them, without that person not seeing your description as being themselves; many people do not recognise themselves in the words of others.

That is not to say that I couldn’t describe myself, couldn’t look either in a physical mirror and write down what I see there or even try to look into my soul and see what has been placed there. The outcome, though, would be lacking: there are things we wish to have seen, and there are things in ourselves which we do not wish to accept, let alone parade before other people. Rather, I prefer writing my letters, spilling my thoughts out onto paper if you will, and offer my correspondent the opportunity of building their own images, their own character assessment, their own appreciation of the person writing to them.

Every relationship begins with a first glance, with a blank side in a new book waiting to be packed with information, with impressions and experiences. Every relationship begins with a certain degree of scepticism as much as a lower level of trust, which is a good thing; some people are skilled at hiding their true intentions from the world, and want something from a relationship which is not fair, not honest, not likely to be accepted by their potential partner if it became obvious from the very beginning. And then there are strange people like me, and I have no problem calling myself strange as my interests go back into the mists of history and have little to do with modern feelings, modern interests, even the systems of communication that we employ in our highly technical world. I enjoy writing letters. I enjoy receiving letters and answering them. I enjoy the feel of a piece of paper which has been through several hands, but has still managed to keep its secrets and which, once the envelope of opened and the message revealed, is meant just for me and for no one else. I enjoy the special level of communication letter writing brings, and imparts.

But what exactly would he write? He didn’t know and he was perfectly content not to know; always before he had known only too well. Now he would attempt to talk to the reader without premeditation, as one writes to a friend.

Here the words of Simone de Beauvoir could almost form my letterhead, and she goes on:

And perhaps he would at last succeed in saying all those things for which he had never found room enough in his too carefully constructed books. There are so many things one would like to preserve with words but which are forever lost.

Of course, she is writing about an author of books, and not a writer of letters, but I think that the idea behind the words is much the same: writing letters without a plan in mind; without having a definite and unmovable target; allowing the words, ideas, experiences to flow freely onto the paper – complete with mistakes if need be – as only a private correspondence can achieve.

I wrote ‘strange’ above because of a wealth of experiences: being the outsider whenever I am out and about who reads a book rather than looking at a small screen telephone; writing letters rather than sending messages; travelling to museums and art galleries, attending concerts and public debates rather than clicking on a link to YouTube or some other instant, pre-packaged service. I am strange in that I prefer the personal experience in place of the re-living of someone else’s experience. Much as I appreciate what others have done, I’d rather swim in the ocean myself, than have it described to me with moving pictures. Strange in choosing a method of communication which cannot be anything other than slow: letter writing in place of instant messaging platforms or communication systems spanning the internet fully aware that a single missive takes seven to fourteen days to arrive at its destination, a reply just as long to return.

I have seen, and once I took part in, many relationships built upon the basis of immediate and constant communication. I see them every single day as I walk through the streets of this town or any other city (at least in the Western world) that you care to name. Instant mail, and then waiting for an instant answer before sending off another instant communication. I have seen people in small groups, sat around a table ignoring one another, because they are busy with their smart phones. I have seen people visiting museums and art galleries as part of a school project, standing or sitting by some of the most beautiful works of art still extant in our world, and preferring to check their status updates and the number of people following them. In November last year a young man, busy with his own phone, drove his car straight into me simply because he was distracted, at seven in the morning, by a message which had to be read, which had to be answered immediately. As a result, my daily walks are slower and shorter these days.

And I have seen many friendships and relationships disintegrate upon the demands of instant accessibility, of immediate communication no matter whether it is day or night. It doesn’t take long, and then there is nothing to talk about, nothing to communicate, nothing left of interest as both parties have been so busy typing words into their smart phones, their tablets, their modern gadgets, that life has passed them by and there is nothing more to describe but the appearance of their new phone, the problems with software or the lack of a working network to communicate over. Which is why I am and remain a letter writer who, despite having access to all these modern, technological wonders, and using them at the right time and place, prefers the old-fashioned methods for real communication.

As to the future and what I seek, what I offer, what could be:

That over my inner me, like an onion, there lay different levels and coverings, so that I simply had to learn how to remove these layers, completely and without pain, in order to discover myself.

This, translated by myself, from the sculptress Renée Sintenis: a quotation which could easily have inspired Günter Grass who, only a few years ago but many years after this was written, uncovered portions of his life in an autobiography called Beim Häuten der Zwiebel (roughly: peeling the onion), but which illustrates my idea of uncovering the past as much as discovering the future.

What does the future hold? As far as the live, what we are living future is concerned: I’m prepared to wait and see; to go out there and confront life by the horns and challenge it to a duel for the most riveting experiences imaginable. For the future of letters: a portion discovery, a portion revelation but, I sincerely hope, always things which make the reader –whether it is me, you, or someone else, stop and think. We all see life in a different manner, through different eyes, even when standing together and observing exactly the same thing. No matter how much we may try, no matter what we believe we know, it is impossible to place ourselves completely into the mind, the life of another, to see and experience what they do.

So, I am old-fashioned, a reader of books and a writer of letters and quite content with this portion of my life. A thinker? Quite possibly, but thoughts need to be generated, and that is impossible without outside assistance, without the fodder which brings, forces the mind to work. I’m no Socrates: I’m not going to stand in the middle of the street, lost in thought, until the sun goes down as he is rumoured to have done, but I will read the results of his thinking, as conveyed to us by Plato and others, and benefit as a result. At least, I hope to be able to benefit.

And writing letters to other people? What is there, aside from the art of communication, old-fashioned about that? Everything and nothing. Our times have changed and the modern means of communication is electronic, something which I can understand but do not enjoy and, therefore, avoid. I appreciate the difficulties involved in writing, in this very slow and laborious technique but, as I am sure you can appreciate too, there is something special about holding a letter in your hands and knowing that it has been written for you; that someone has given up their time and concentrated all their thoughts, over a longer period of time than a status update or an electronic mail requires, to pass their thoughts, opinions and experiences on. Back in history, a letter was far more than a piece of paper with news and views: it was the main means of communication between family and friends; it was read and passed on to others for their perusal; it remains a form of social history for future generations. Where will all the electronic mails, the status updates, the Twitter comments be in a thousand years? And here, today, we still have Marcus Cicero, writing over two thousand years ago to family and friends and, today, still enlightening us with his views and opinions, with his life.

Where does this correspondence go from here? I would hope that it will blossom and flourish over many years, that we will get to know one another in such a fashion that we can learn from our shared thoughts and experiences without having to physically hold them ourselves, that we will both gain a certain platonic pleasure from receiving mail and knowing it is exclusive to us. Knowledge, conversation, life experience should know no gender, race or geographic boundaries. Sadly that is often not the case, and we constantly hear of or experience the opposite, but there are exceptions, and I can promise you, the exceptions are those which make life worth living, which make it worthwhile getting out of bed in the morning and, for me, which make it more than worthwhile setting out through wind and weather every week day to check my post box for something new, something inspiring, something to make me think. Books are all very well, and I love and appreciate them more than many can imagine, but a living correspondence has something a book can never hope to replace, no matter how big the franchise, how many spin-off titles, how many pages of typescript.