Home / Personal Letters / A Storm Raging In The Distance

A Storm Raging In The Distance 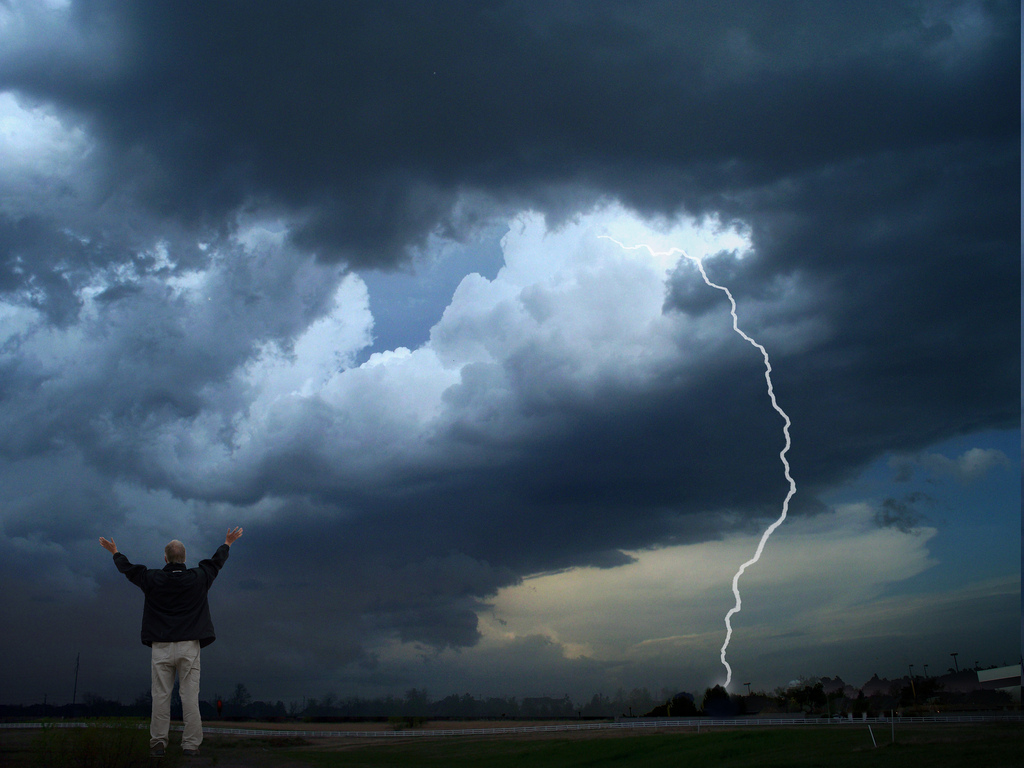 There is a storm raging in the distance; I can hear loud rolling thunder, occasionally see the flashes of lightning as its power moves across the heavens, swaying trees, soaking earth and darkening the streets of another town. Here, on the edge of the storm, it is relatively quiet: I can look across the rooftops and see the defined line between rain and subdued sunlight; I can see the trees moving back and forth under the strength of the wind; I can imagine what it is like to be in the middle of the storm, surrounded, like a tornado hunter who reaches the eye of the storm, and looks out. But I cannot feel it. I cannot experience the storm in all its glorious reality without going out and throwing myself into its midst, into the rage, into its inner life. My imagination can conjure up many images, based on what I have experienced myself, what I have seen and been through, and what I have been told of the experiences and events in others’ lives, but it is not the same, there is always something missing. Writing in her semi-biography of Diego Velázquez, Laura Cummings shares this insight:

Brushing that surface is a sense of movement, of breathing impermanence. This is how Nieto looked in mid-thought, in mid-life, at this moment; there is no straining after the definitive. The man is here, supremely conjured in paint, but the picture does not give all of him because there is always more within him. He is allowed his privacy, his secrecy, his full mystery as a man, which is the respect Velázquez gives all of his sitters. Monarchs, chamberlains, watersellers, dwarves: they are all sovereign of themselves.

It may seem strange to compare a storm which can be seen on the distant horizon to a painting from seventeenth century Madrid, but they do have a strange if simple connection: we are seeing, or imagining them, from the outside. We cannot appreciate their full power, the vitality of what is there in real life because we are not physically there. We are neither within the raging storm, nor in the mind of the man who gazes out, still and unmoved, apparently lost in thought, after so many years, from the canvas of an oil painting.

Emerson, in his essay on Friendship from 1841, wrote:

The essence of friendship is entireness, a total magnanimity and trust

Our friendships hurry to short and poor conclusions, because we have made them a texture of wine and dreams, instead of the tough fibre of the human heart. The laws of friendship are great, austere and eternal, of one web with the laws of nature and of morals. But we have aimed at a swift and petty benefit, to suck a sudden sweetness.

You write that you have no experience of the world at large, which I can well believe, but, in writing, you have taken that first step out of the safety of your known surroundings and aimed for the storm, aimed for the heart of something you do not yet know, but wish to experience while, at the same time, appreciating that you cannot ever experience it in the same manner as others. The obstacles, as you see in your surroundings, are too great and, to all intents and purposes, immovable. The solution, as we both appreciate, is to experience, to become a part of the whole in a secondary manner, through the good offices of someone else, someone who gains as much pleasure through correspondence, through conversation, through debate and discussion as you possibly do. And yet, we both know that neither of us will ever be able to witness the whole, to work our way into the eye of the storm, into the thoughts and emotions of mankind, into the depths of society; there will always be secrets. We strive to reach a goal, even though we know that goal to be out of reach. Sometimes we take a step too far and stumble, hopefully righting ourselves in time, and then come to realise that one of the main ways to achieve an insight into what we do not have – connection to society and all that it entails – we need insight into what we do have, into our selves, into what makes us what we are, and how we, and others, see ourselves. Almost all of literature – and you write of an interest in classic literature – is concerned with self, as we see it and as others see us and themselves, right down to the manner in which they portray themselves, as opposed to how they act and are seen.

There are some philosophers, who imagine we are every moment intimately conscious of what we call our Self.

David Hume, writing in A Treatise of Human Nature about personal identity. The keyword is, of course, imagine. These are often people who do not have a strong conception of how other people see them, how they appear in the eyes of those they present themselves to, how they are received in society. They are the ones who have erected a facade before their true being, which is almost impossible to see through: they prevent us from gaining access to their true selves, to the possibility of a true friendship but claim to be open. It is true that we can never know another person through and through, as in the painting of Nieto, there will always be something held back, something we cannot access, something which hides in the back of a mind or in the past somewhere, gathering dust.

How do you see yourself? This is, as I am sure you know, a classic Socratic question, but it needs to be answered so that we, as an entity, can move on to see others. We cannot appreciate someone else’s pain, pleasure, fears and emotions if we do not have a conception of what they are, what we feel when confronted with them. We cannot put ourselves into their shoes if our own are still pinching and not well worn in. Can you describe yourself in an easy and satisfactory manner straight out without a second thought? Can you give someone who cannot see you an impression of the person you are, the person you were and the person you wish to become? Can you imagine yourself in a different setting, such as in the middle of that storm raging behind my back?

I have no doubt whatsoever that this is probably the last thing you expected to read in a letter. For some, letter writing is all astrological signs, the weather, their cat’s latest antics and, of course, anger at something or other where they could have taken part but didn’t, and the result is not to their liking. That last is, as I am sure you appreciate, politics which, we can agree, is well worth steering clear of. The truth of the matter is that our world contains so many facets, so many colours and angles, corners, rough edges, hills and valleys, so many thoughts and experiences, it is impossible to describe. Our world is something which, even when we are out in the very middle, does not reveal all of its secrets, all of the pleasures and pains, the truths and lies. For some a chat about their horoscope is more than enough to tide them over, to bring them through the day. Others find the very act of sitting down with pen and paper burdensome, but will happily write short messages on Twitter, Facebook and other social media platforms for hours on end. And there are those who read, those who write, those who go to concerts and the theatre, travel, explore, sit and vegetate in front of the television on a Saturday afternoon. We, society, the world-at-large, are a Sammelsurium of personalities, desires, dreams and reality. We can explore from the outside, or venture in and take a chance at where the winds will blow us.

In my case: my interests are philosophy and literature, especially letter writing – along with general reading and an all-abiding interest in old photographs, which I collect – and the manner in which people expressed their lives through the written word. With the passage of time there is little left to us, those who wish to learn and experience, of all that is past; we must rely on what others have written and, perhaps, write so that those to come will see and stand a chance of understanding. I cannot experience the world which interests me, the Victorian world of class system and manners; the Roman world of Cicero and Pliny; the Greek world of Socrates and Plato. Except through the words which have been passed down to us. I cannot even imagine a storm from the past, only compare it to what I see today. I see another world, far out of my reach, through the eyes of others. And still there are those secrets, still I will never have everything I could wish for, but the knowledge that I began, that I took that first step and headed towards the eye of the storm.

It’s strange the way challenges come at us: some we can react to immediately, we know the answers and how we should play them; some simply knock us off our feet and leave a breathless mass of pain and confusion on the floor, waiting to see whether we will stand up again. Some, such as this letter probably appears to you now, are so strange, so unexpected, that we do not know what to do but, inside, we realise that there is a challenge there and it is addressed exclusively at us. And then, well, do we sit down once more and go back into that which we know, or do we take that first step into the unknown?