She Is The Former Governess Of Princess Mary von Teck 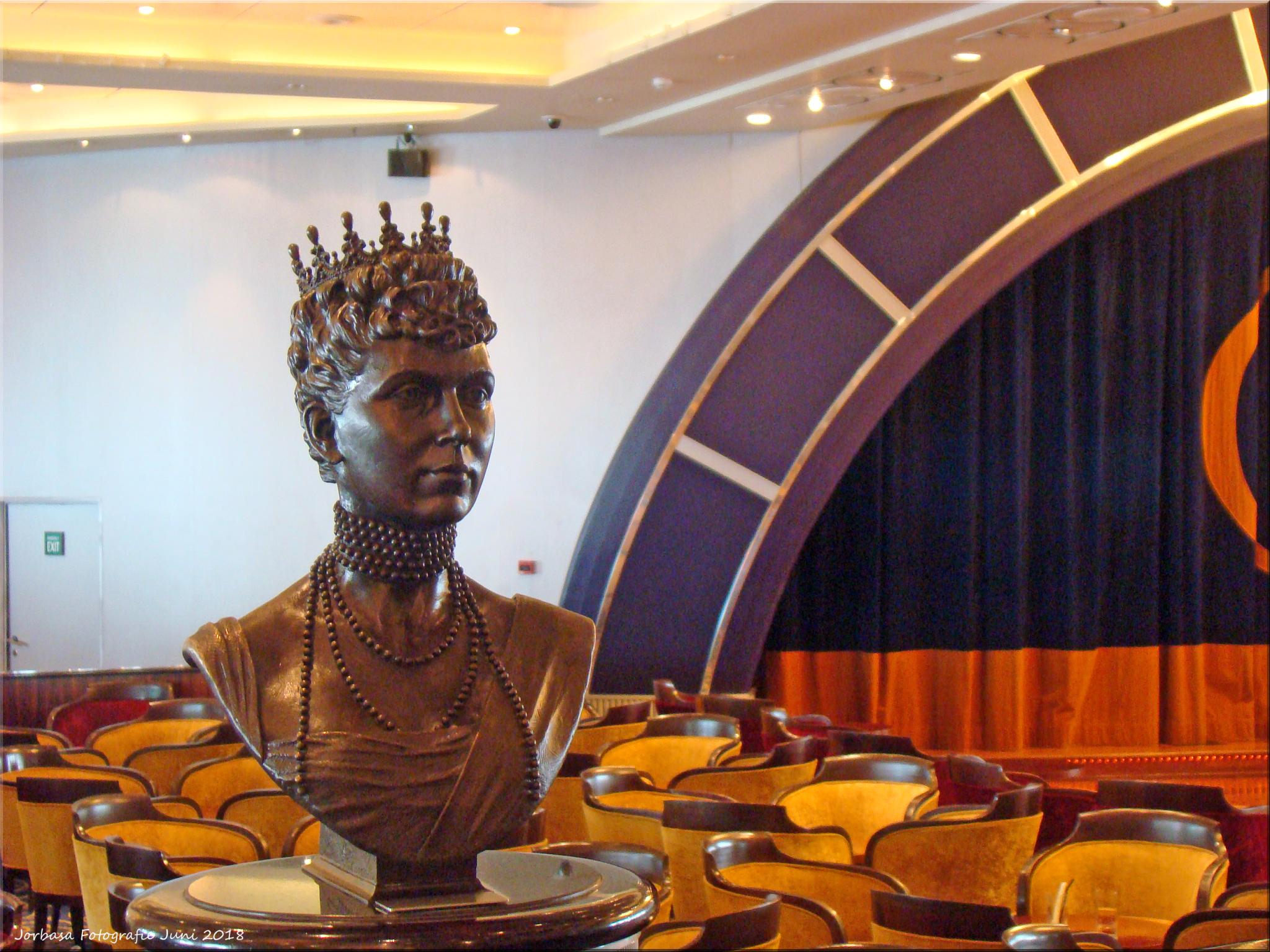 Today I have been thinking about the strange things in life which happen to us, the coincidences, the things which seem to be really out of the ordinary and which, when we stop to think about them, make us wonder how such a small matter, through the whole of time and this world, could ever have managed to land on our doorstep. The thought came to me – not for the first time – when I got back from visiting a flea market today and began breaking up an old photograph album. Normally I would have travelled into Bremen today, as I do most weekends when nothing else takes priority, and visited the standard flea market there. There is one on a Saturday along the banks of the river Weser, during the summer months, and one either behind the main railway station in the centre of town, or under the parking space of a shopping centre when the railway area is being used for something else. Both of these always have the same dealers working, and often for very high process for what they have to offer, but now and then something interesting within my area shows up and I can pounce on it gleefully.

Today, however, is the medieval market weekend here, and the flea market held in the centre of town normally has private people selling what they’ve really found in their attics who are prepared to bargain, as well as stop and have a chat and enjoy the time of day. The album that I found dates from about 1890 and was almost full – that is, there were about one hundred and ten photographs in it. Most of the photographs I find have no details about who is in them, and even if they did, it would tell me very little as they are ordinary people long gone. Even their own family, maybe three or four generations later, have no idea who they were. It is sad that so many people lose their own family history, but I am sure even worse is to come when people see that there are no photographs, in a printed form, whatsoever, and all the virtual, online versions disappear when the passwords can no longer be remembered, have not been passed on, or the fees for a storage platform are no longer being paid. Now and then there will be a photograph with a name on it, a date when the picture was taken, or even the date of birth of a child. Today I had all of those things but, as usual, most of the photographs were blank. They have the name and an advertisement from the photographer – which is my main interest – but nothing about the people who are meant to be the main subject.

This little photograph, a copy of which I have enclosed, is an exception. The two women pictured are not related, but I suspect they must have become friends at some stage towards the later part of the century. The photographer is Julius Giere, who lived from 1807 to 1880 and was a very well-known photographer, artist and engraver. With his dates I have an idea of when the image was shot. On the reverse side someone had carefully written down information about the two ladies which helps further, and I learn that the lady on the left is Mrs Emmy Lampe (born Hespe) who is presumably married to the gentleman in the photograph she is holding and is now a mother living in Warsaw. The lady on the right is Miss Johanne Mound from Hannover, and she is the former governess of Princess Mary von Teck. At this point it becomes very interesting: Princess Mary von Teck was born in London to the von Teck family – whose seat would have been in Württemberg, Germany – who were relatively poor as royals go, and lived on a pension. She was educated at home, by this governess, and later became the Queen Consort of the United Kingdom and the British Dominions, and Empress of India. She was married to George V, one of the sons of Queen Victoria. Johanne Mound receives, as you might expect, absolutely no recognition for her work in the official record; she is not named anywhere that I have been able to find, and it is merely noted that the Princess Mary was privately educated at home. 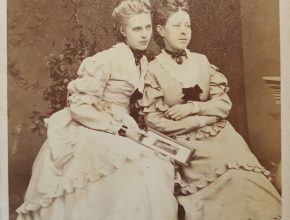 Emmy Lampe and Johanne Mound photographed by Julius Giere prior to 1880.

For me, as a collector, it is a strange and wonderful thing that such a piece of social history should have survived so long, and finally fallen into my hands. I have, of course, no connection to the royal family at all, other than the fact that I lived practically next door to Buckingham Palace at the end of the Sixties and went to school with children whose parents worked in the palace stables. But to be able to put a name to one of these thousands of images I have, and a rough date, and then add something of a person’s life story to the whole makes it all the more worthwhile.

I am sure many people would consider my interest in photography to be more than just simply boring, and would never be capable of understanding the sense of achievement – even joy – when an image is identified, when a background story and a life come to inhabit these simple pieces of card. It is much the same with most hobbies, I suppose – although many would hardly call my photographic collection a hobby any more – it is interesting to the person pursuing their interest, but not to anyone else. Exactly the same for those who might come to read your latest letter to me: few would understand the pleasure of seeing a ground squirrel boxing, let alone even entertain the notion of feeding and watering them. We grow and lose our innocence, the curiosity over life, the passion of a child seeing something for the first time. True, we are no longer children, but it is a good thing, I believe, to always have something of the child within you, and to gain pleasure from the simplest things in life.

The young woman I have been helping with her English is going – she hopes – to the university in Gröningen in Holland, where English is part of the requirements for entry. English is taught as the second language in all German schools, and a requirement along with a second foreign language for graduates of the highest school level. Many of the universities in Europe welcome international students, and work in several languages. Well, that’s not quite true: the British universities welcome foreign students at the moment, but only work in English, which is exceptionally restricting. If you’re doing a course in Germanics or European literature, a foreign language is of use, but isn’t demanded for any of the other courses. Personally, if I was going back and doing philosophy again, or any of the other Humanities, I would insist on at least one Romantic language, especially when it comes to literature, philosophy, history and so on. The British are far too insulated, where the Europeans have opened up considerably and are making wonderful strides in educational standards.

As a child I explored London. With your ten-street-town this is probably unimaginable, that a nine to fifteen year old would just be able to get out and wander at will throughout an entire city, and I suspect that many people wouldn’t believe it today, or wouldn’t take the chance if it were offered to them. I’m not sure whether you’d say that the city was safer then than it is now, or whether parents are considerably more conscious of the possibility of something going wrong, but I absolutely loved it and wouldn’t change that level of freedom, and exploration, learning, for anything. I’ve carried this on into adult life, and never had a single problem. Travelling in the United States a few years ago – not really travelling, since we were only really in one city – I wandered through all sides of Baltimore during the early hours of the day, including those areas where there are no front gardens, no yards, and no street lighting. For me it was an a normal thing to do; other people would have been horrified if they’d known where I had been. I do believe, though, that if more people took time to see all the sides of the town or city they live in, there would be a good deal more understanding, and perhaps a certain amount of acceptance that some things must change. You cannot confront poverty and poor housing, for example, if you have never seen it first-hand. You cannot see a city if you only speed through it in a closed car with a tight escort.

During our summer and other vacations, when I was not walking through and across the country, I was always out on my own in the city. I would simply walk to the end of the street and decide whether to turn right – towards Buckingham Palace – or left – into Victoria. Two completely different areas, right next to one another. And then there was the West End and the East End, the right and the poor. Going up to north London, or across the river into south London. In some areas you could cross a street, and literally be in a different world. I lived, at the time, in a three floor apartment on top of a five storey building. My father’s offices were on the first two floors, and we were right in the centre: Buckingham Palace within spitting distance, the Houses of Parliament and all that an easy walk away. When I turned left towards Victoria, and then left again before reaching the main shopping street, I would enter an area of tenement buildings, also five stories, but with small apartments on each floor. Poor, dirty, uncared for. All this within five minutes slow walking time.

And would I still walk through all of those areas again, today, now that society has changed – as some people insist on telling me? Most certainly, and without a second thought. I would probably be considerably more cautious in some areas, depending on the time of night or day, but I’d still go, if for no other reason than to remind myself that society is those who are seen, and those who we do not wish to see, and that we live within hailing distance of each other.