Home / Personal Letters / There Is No Childlike Exploration

There Is No Childlike Exploration

There Is No Childlike Exploration 2nd June 2017 Adam
Personal Letters 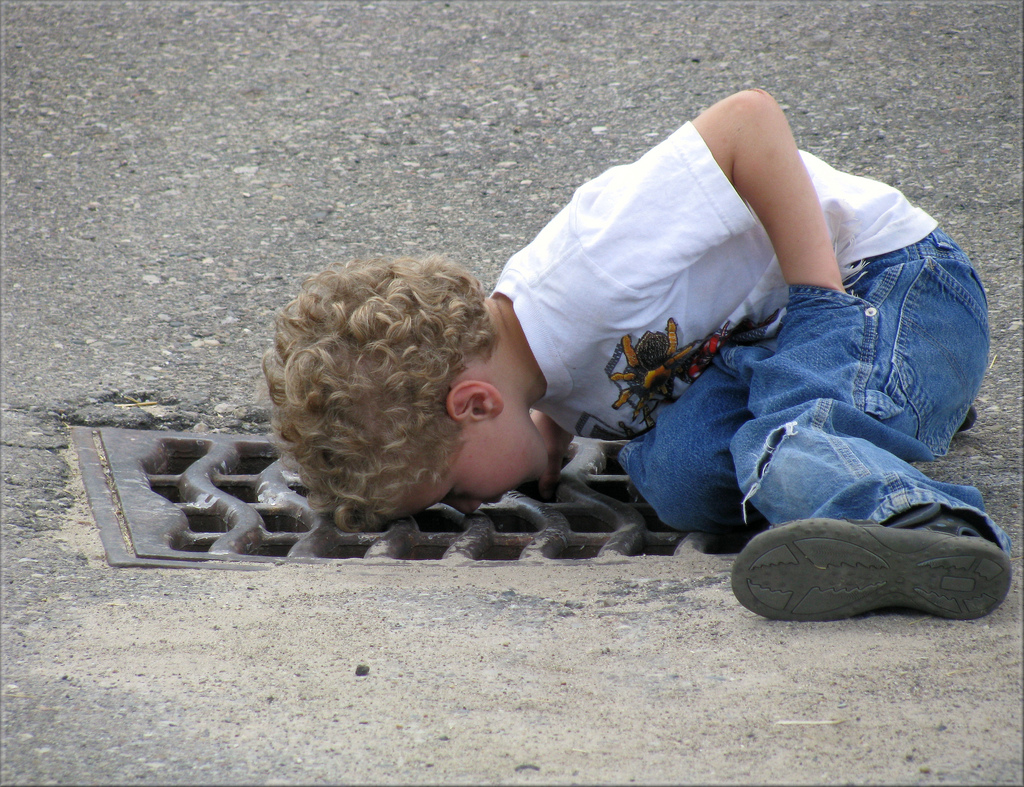 I wish there was something childlike – whether it be for nature and art as you write, or for other things in our modern world – about many of the younger adults, teenagers and even children that I come across in my daily wanderings. The world seems to have become a place where everything has to be taken seriously, where there is no childlike exploration any more. We are told that we should act our age, and that age often begins with some adults idea of how each generation should be, with hardly anyone allowed to really enjoy their childhood any more. Everything is geared to the future; to making sure we have the right qualifications for a college place and career, and this begins practically at birth, as the first kindergarten and school places are sought. I see eight year old children with their noses not in a mystery or cowboy book, or a book about horses and princesses – yes, I know how sexist this sounds, but I am not going to split gender as I know there is a cross between the genres – but stuck in a smart phone where they can keep up with the antics, and sales tactics, of their heroes, whilst not losing touch with comrades they have just left in the schoolyard. Schools have taken to banning such instruments during school hours, but that does not alleviate the problem; just as, I suppose, television was a problem for younger people in my day. Parents purchase these cell phones to keep up with the neighbours, so that their child is not seen to be left out from the mass, and thereby destroy something of their originality.

And, of course, rob them of hours of quality time, of getting out to see the world with their parents and friends without the need to photograph themselves in front of everything and share it with the rest of the world. It is difficult to spend time with a child who has his or her nose in a smart phone the bulk of the time, or who is constantly being interrupted, distracted by the pings and beeps of incoming messages, which are usually of no consequence anyway.

It is wonderful how solicitous Plato shows himself in his Laws about the gaiety and pastimes of the youth of his city, and how much he dwells upon their races, games, songs, jumping, and dancing, whose conduct and patronage he says antiquity gave to the gods themselves: Apollo, the Muses, and Minerva.

So writes Michel de Montaigne in his essay on the education of children, showing that this freedom childhood brings with it was as important in centuries past as it should be today. We all know the proverb of all work and no play, but few of us, sad to say, still have the memories of the child within us. We have forgotten it; pushed it out to be replaced by the cares of the modern world; lost the artistry of imagination and the delight at the most fascinating spectacles of nature. The human race, on this side of the great divide at least, has grown boring. We are fixated with advancement, that our children have everything better than we did, or than we imagined we did, and thereby rob them of the greatest time of their lives. But to have retained some of that childishness in our souls, to still be childlike in some of our interests is, to my way of thinking, a great asset. It protects us against the stress and hectic of the modern world, where everything has to be done quickly or, the Fates forbid, we could miss something.

Which is much the same as what we see in younger children today: they must have their cell phone near at hand and always check it for updates, or they have the feeling they’ve missed something important. This is what they are being taught by the actions of their contemporaries – and the ease with which their parents submit to demands – who, in turn, are simply following them too. One vicious circle of loss. The childlike enthusiasm for nature and art, which you and I have retained throughout our lives, is missing from theirs.

For me it was television. I am of an age – we have an age difference of thirteen months – where television became the major factor in leisure for many children. I recall the day our first colour television arrived, adorning our London home with its massive size and a few extra buttons. I was fortunate: my father insisted that we only watch television at certain times of the evening and that, whenever we had more free time such as on a weekend, we went out in fine weather and played in one of the local parks. This was also back in the days when television in England was two and then three channels; the selection of programmes was exceptionally limited and the two companies beaming their goods out to an unsuspecting public were still required to produce a high level of educational programmes. Even so, I almost missed out. It wasn’t until much later in life, and despite having everything I could have desired close at hand, that I discovered the beauty of books. Some people today, having been terrorised by teachers in their school days, do not touch another book all their lives, unless it is a bestseller all their Real Life or Virtual friends say they must read in order to be in the In Crowd. Is that still a thing? I don’t know; it was in the Sixties, perhaps it is again.

Funnily enough, I came back to books at the age of eleven, which may seem strange to you – coming back to books – when I was sent off to a boarding school hundreds of miles to the north of my home. Here I was told that I could not read certain books because I was too young; there was no way, it was supposed, that I could possibly understand the contents or, as in one or two cases, the books were present, but not on the shelves for general consumption. Imagine a school library where the librarian and teachers actively discourage pupils from reading to advance their abilities. Sadly it is easy enough, you don’t need to imagine it: the Church and many politicians have been telling us what we may or may not read for centuries, and that has not changed to this day. But coming back to books meant that I saw something other people didn’t want me to do, so it must be interesting. There must be a very good, but hidden, reason why I couldn’t take out a certain book, or why this or that title was secreted behind the librarian’s counter. I became a school librarian, and had access to the books I wished to read, without needing to sign them out under the stern, disapproving eye of a blinkered adult. Nowadays this restrictive access rule, often made upon the spot I am sure, is unnecessary: give a child a smart phone with access the Facebook, Twitter, Instagram, SnapChat and all the others claiming to be social media, and you have lost them to the outside world.

No one writes essays like Michel de Montaigne any more, or letters like Jane Welsh Carlyle. The works of William Golding, Aldous Huxley and Ray Bradbury are unknown to most, merely an occasional reference in the news when someone wishes to claim that all we experience now was foretold by these writers. William Shakespeare, Christopher Milton, Robert Frost; all consigned to the reading list for English literature and, as a result, anathema outside of the classroom. No one looks at art any more, let alone produces art which can be recognised as true Art. Museums and art galleries need public funding because the public doesn’t fund them with their visits and entrance fees. My own personal field of interest, aside from books and writing, has been replaced by images on disks and memory sticks which become outdated, unreadable, lost over the passage of time. I cannot bring myself to call these images photographs although, strictly speaking, they are. Perhaps I am a little too old-fashioned when it comes to such things: for me a book is printed on paper to be read and kept on a shelf; a photograph is printed and saved in an album for future generations; a work of art is displayed to be enjoyed by as many people as possible. A smart phone is still a telephone and, for me in my old-fashioned way, there to be used to talk to people you cannot otherwise meet up with – preferably to arrange a meeting.

And then, of course, we have letter writing which, I am delighted to say, has been one of my hobbies since the early Eighties, and which, like books, I cannot imagine doing without. There are times when it is impossible to communicate with others, to hold a conversation, to discuss and dispute matters of interest – and no one can convince me that electronic mail is a viable replacement, it being so impersonal – and the intimacy of a letter, addressed to just one person and absolutely unique as a result, is irreplaceable. To be honest, one of the main benefits is that the writer can put down his or her thoughts and opinions without being sidelined or distracted by the person being written to, which has its advantages. Whether the letter is then read and understood, or even read, is another matter entirely. But letter writing as a means of personal communication has been unsuccessfully written off as obsolete or even dead so many times, I suspect it is now an immortal entity supported by the eternal gods themselves, high on their mountain top, swathed in the mists of time. There is nothing quite like receiving a letter from someone you have never met, who lives across the other side of the world and has a wealth of life experiences which will forever remain hidden from your own experience without the communicative word. Few of us are lucky enough to be able to travel the whole world and stay in one place long enough to learn all there is a local knows. To do that I think we would need as many lives as there are countries.

I haven’t been in a raft rushing down the Colorado river, as interesting as that sounds to me now, but I have travelled across the desert in Saudi Arabia and Iraq, and through the jungle in Belize and Mexico, and seen many cities, towns and villages right across Europe. I have even been parachuting on Cyprus and took part in a long distance, two-day endurance competition in Ireland, many years ago. Admittedly there is a long way to go before I can claim to have seen the world, but I insist upon making the effort and, where possible, sharing what I see, what I find, what I experience with others.