View From My Window 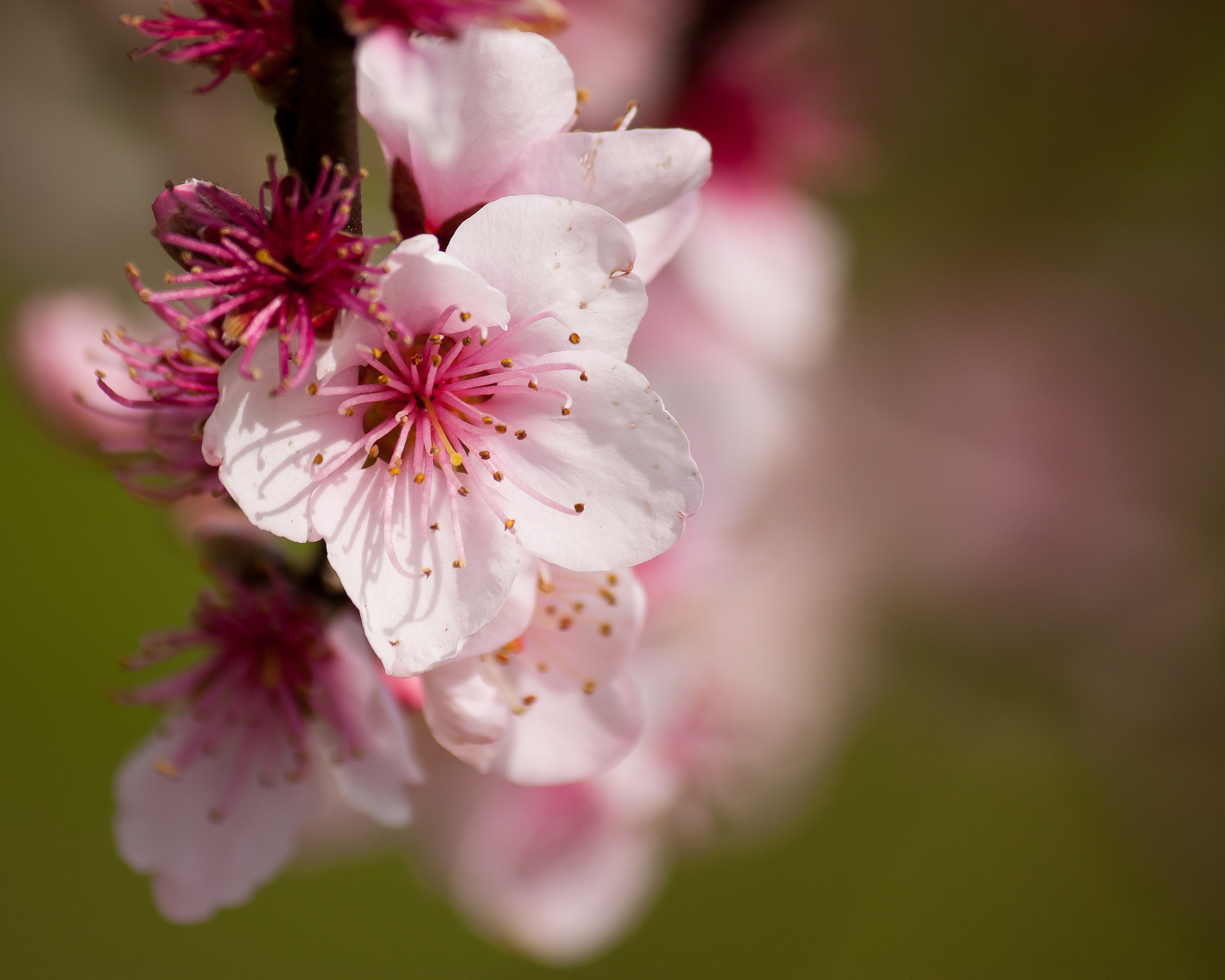 If I stand at a certain angle, slightly to the left but not so far that I come into the adjoining room, and look out of the terrace window, my view is framed by new lilac curtains and leads out onto a garden filled with the early creamy-white blossoms of my cherry trees, the green of my neighbour’s garden and the slightly mouldy brown-grey-green mix of his old wooden shed, packed with all the garden utensils he doesn’t use, a few containers for garden waste and other items which I do not wish to explore further. A step further into the room, to the right, leaves the framework in place, but presents me with a view of devastation, of neglect and overgrowth more akin to a jungle than a garden. This view, as I am sure you will have guessed, is my own garden, and the one I tend to avoid as much as possible, partially because it makes me feel guilty but mainly because I know, no matter how much and how carefully I plan my day, I am not going to be setting out into the wilderness to bring any form of order to the chaos. I am not a gardening person, although I most certainly do appreciate the view of a well-tended and cared for expanse of green and bountiful, colourful flowers graced with trees in full bloom, all that I view tends to be the domain of someone else and never my own. Good intentions: those I had right at the start when I moved in here, and I did manage to mow the lawn and care for a few areas right at the beginning, but then one thing led to another and the downward spiral into jungle growth began its course and I was lost forever. Probably not quite, I will get around to it later on this spring as I always do, but also always half-hearted and wishing I could be inside writing letters, papers, articles, a new book perhaps, drinking coffee and tea and, above all, reading a book.

The problem is that my To Be Read pile keeps on growing with new titles which have inspired me at the time of purchase, but have had to be placed down at the very bottom according to a strange form of priority system. Serious books always come first – historical works, philosophy, literature and those I am meant to review – and then the ones which merely interest me – same categories – and finally the fiction which I use to clear my mind now and then. As a youth I called this last group of books Brain Candy, simply because there was nothing to them, no need to think, you worked your way from page one through to the end and cleaned out all the mess of thoughts in your mind through their total lack of inspiration. These days I don’t waste my time and money on such titles, but still have a small pile of crime and historical thrillers which, being of a slightly higher calibre in writing style and characterisation, interest, but still do not challenge too much. They are the ones which people ask about when hearing that you have a certain interest; recently this was someone who knew I have read almost everything from Marcus Tullius Cicero, the Roman politician who lived, wrote and died two thousand years ago, and suggested I read the fiction trilogy by Robert Harris. It’s easy enough to push such books further down the pile without feeling bad about it, and when asked point out that work titles come first and I am busy with a literary history of the Roma peoples in Europe, or the latest biographical / philosophical work on Wittgenstein and Heidegger, which gathers some form of understanding from whoever poses the question or has made the suggestion in the first place. I think the form of understanding here is more a desire to move away from the subject in case I suggest that they read a philosophical book in return for my reading their suggested rubbish; some are happy to suggest, but not so willing to take suggestions for their own reading pile.

You are from a little town and I am originally from the capital city of London, and now live in a small town. Looks almost as if we have swapped our habitations, although mine is from choice, admittedly. My small town is about one thousand years old, but only recognised as an inhabited village or town for the last eight hundred or so, when it first appeared in official records, and straddles a beautiful river, is surrounded by fields and could be called a farming community but for its size and history. It was once a County Town, with its own German Count, and was the centre of a municipal community larger than many in existence today. Back in the Seventies, long before I even thought of leaving London for good, there was a massive reorganisation of the regional and political boundaries throughout Germany, and the county disappeared, with the formerly so important town being relegated to a position underneath a city which has once been a vassal. Things went downhill from there, and a highly successful region has now been pushed down into debt, whereby the problems do not affect this town as such, which is still successful, but the higher powers who control the new region and its finances.

But that is all politics and this first letter is not meant to be about the political or financial incompetence of those people elected to be in charge of taxpayer’s money, it is meant to be about an introduction and a challenge. The former is difficult, the latter is obvious. I’m not very good at writing about myself in a direct sense, so I tend to write about my interests; now and then I quote from books I have read or from those who appear to be wise, have knowledge and experience, and generally cover myself quite adequately that way. The challenge, as I say: obvious, is to beat my way out of the pile of letters which you have undoubtedly received from around the world, to stand out and to be the one you decide is worth writing back to, forming a written friendship with and so on. No easy task, as I am well aware, since you are young and have the greatest choice, and I am old and only have one chance.

The gardens, those that I can see and that one which I avoid, are dowsed in rain and being taunted by the wind. My neighbour has his grill out on a small wooden terrace he’s built around a pond in his garden; the weather has forbidden its usage so far, although there are others nearby who have stuck it out and ignored the chill wind, the wet, the uncomfortable cold of a return to winter temperatures and taken their chances. I’d much rather sit indoors and read a good book at the moment. The only garden I have been able to create and keep is in the small area of my house where I actually live; that is the part which isn’t waiting for me to rip out and replace cables, pipes, walls and all the other monstrosities normally hidden from view which we take for granted. The indoor garden began with a few small houseplants which should have given colour to the whole double room, but that colour tended very quickly toward brown, dried out and dead. Then I discovered the evergreen type of plant and, especially, the cactus both of which, I am glad to say, are thriving. My work room, which is really my entire living area, gets sun in the mid to late afternoons, so those plants which thrive on sunlight for as many hours in the day as is possible, they stand no chance whatsoever. My only problem is remembering that they also need a good dash of water regularly, and some fertiliser too, otherwise even these sturdier ones will go the way of their predecessors, leaving me with a room devoid of colourful living interest.

Although, to be honest, my rooms would be packed with colour – if not life, unfortunately – without any plants. I redecorated last year and placed bookshelves on all the wall space where one would fit, and in all the remaining gaps there are photographs and works of art which add more of a literary and artistic colour and, hopefully, inspire me in whatever I happen to be doing. I now have the great advantage of being able to stand up from my writing table, walk a maximum of ten steps, and reach almost any book I could need or desire for a reference. Literary works and historical photographs are my thing, in a manner of speaking, and so having them decorate the areas I spend the most time in makes sense. It tends to surprise visitors, though: the most common question is to ask whether I have read all the books they get to see – I have about six thousand in this one room – and I have to truthfully answer that I have not. There is always one on my desk I have not yet finished, and maybe two waiting for me to get round to them. Sometimes I delve into them just for the sheer pleasure of re-reading something I enjoyed in the past, especially when it comes to letters other people have written and sent, and sometimes to enhance an idea I have in a letter or essay.

I’m a great believer in the value of real books as opposed to those things which appear on an electronic screen and have no soul. Many years ago I worked in a book department in a major store in the centre of London, and it was absolutely ideal: any book I desired could be found and produced within a few days, and that all without the Internet. Today it is even easier, of course, with online ordering and so many sources for good books and good writing, it is no wonder that some say we are becoming far better educated than our predecessors, through the availability of information, and likewise no wonder that this availability, this abundance, causes us to skip over depth and take our knowledge only from the titles, headlines and the shallowest of readings. Perhaps we will have a chance to discuss such things: you from your young person viewpoint, me from my old person viewpoint. It could be interesting.