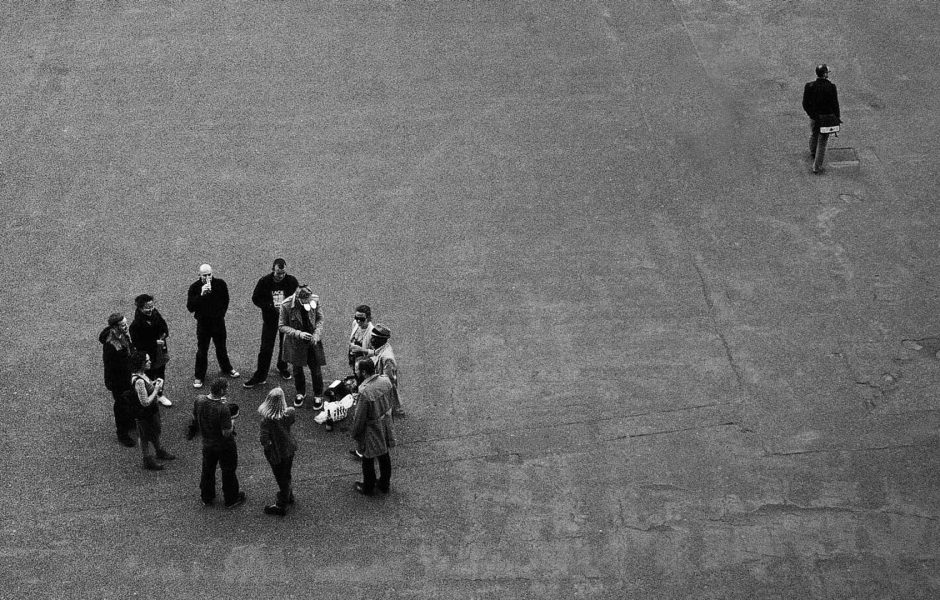 One of the saddest things I have seen over many years is a person struggling to fit into an ideal he or she has been told is right for them, and not realising that their destiny is their own and not that foretold by someone else. They fight to get the right clothing, to speak the right language, to walk the walk and all the rest of it, and remain outsiders desperately looking in, laughed at by those on the inside whose lives are mundane and dull, and hardly an aspiration for anyone else. Society is gradually becoming a class of people who have been told what they are to be, mainly by social media, and who are still trying to show everyone else that they are such, that they fit, that they are worthy, that they can dumb down their own minds and individuality to become a drone. And rather than turning round and seeing the benefits of being the outsider, seeing how much more there is to life around them, behind them, off the beaten pathway everyone else has already followed, they paw and moan and try anew, futilely.

You say, in effect, that you need to look in a mirror occasionally to see that you have not become the same as those around you, and I am assuming you mean a metaphorical mirror more than anything else when you write that you need to check yourself. There are those who need a mirror – classic fairy-tale scenario – to prove their worth, to answer their question of who is the best, the prettiest, the most intelligent. And there are those who take a mirror to remind themselves that they are an individual, free of the taints of a society hell-bent on similarities and sameness, an individual who can think for themselves and realises, without narcissistic thoughts, their own worth as an individual. Which, of course, is not what the system wants. And then there are those who take a mirror and use it to show them what other people see, to remind themselves that their own vision of Self is not that which is received, no matter how they project their character, their personality, their interests. People see us according to their own perception of how we must be because of our looks, our accent, our environment, our gender and ethnic origin. Everyone is prejudiced, everyone judges; it is part of our nature. Alberto Manguel writes:

At least two different sorts of reading seem to take place within a segregated group. In the first, the readers, like imaginative archaeologists, burrow their way through the official literature in order to rescue from between the lines the presence of their fellow outcasts, to find mirrors for themselves in the stories of Clytemnestra, of Gertrude, of Balzac’s courtesans. In the second, the readers become writers, inventing for themselves new ways of telling stories in order to redeem on the page the everyday chronicles of their excluded lives […].

In the first group, those who wish to be special by conforming to someone or something else, by fitting in to a certain group, by pushing their own mundane character into the higher spheres of someone famous, infamous, noteworthy and – as far as the quoted literature is concerned – immortal. The second, the creators, give of themselves from their ordinary lives so that others may appreciate. The quoted paragraph is, of course, written about women, but could be set just as easily as a reflection of what men are like, even if those men do have a slightly better social start, from their gender, and are believed with far more readiness than a woman who has achieved the same ranking, earned the same accolades or qualifications.

As you suggest, even if you do not write it down on the page, there are certain parts of society which we do not wish to be a part of, do not wish to be connected or associated with and to. Sadly, our perceived or actual circumstances allow others to draw the conclusion that we belong to an entity which considers us to be an outsider, or which we do not feel pulled toward or belong to. They do not take the time to check, to ask, to learn, but allow their normal level of prejudice to say: he is in this position, therefore he is one of them. A very low and sad re-forming of Descartes’ words in a manner which, I am sure, he would never have wished considered. I should add that the quotation above refers to the thoughts of George Eliot, which makes it all the more amusing, she having assumed a man’s name in order to fit in and be published, chastising women writers for their works. But we also have this idea of being true to ourselves, and your checking to see that you are still an individual, still the one who you were a few years back, and hope to be in the future, doesn’t change how other people view you. To be able to influence that view, we need to be in that elite, and small, group of people who, as individuals, maintain contact with those who are important to us, who share their ideals and values, and who are not the poison which brings us into situations others assess as being of the lowest grade.

I am biased: I have been writing letters to people since the early Eighties, sharing their inner world and thoughts as other people have never seen them. I have read the tales of what people wish to have seen of them, as well as writing my own, which recount more of the individual than of the group to which they belong. Your present environment is an ideal example: some belong in the group which surrounds you, which you have contact with every single day, and some are merely planted there. Everyone in that group environment, however, is seen by outsiders as being the group, without exception. The only way we can show outsiders that we, too, are an outsider forced into an alien situation is through communication. Not all communication is ideal, of course: we could shout into the desert winds and communicate with our wilder side, but the relief we achieve would be temporary. We could express our thoughts in writing, in a journal; but this is nothing more than a monologue and brings little new, and seldom any real relief. We could express our thoughts as a conversation through letter writing – being restricted in the manner of conversation available to us – and, thereby, not only create a character, but show our own through the words we use, the ideas we bring forth, the opinions and knowledge we are able to share and debate.

Letters are commonplace enough, yet what splendid things they are! When someone is in a distant province and one is worried about him, and then a letter suddenly arrives, one feels as though one were seeing him face to face. And it is a great comfort to have expressed one’s feelings in a letter – even though one knows it cannot yet have arrived.

Written in a different culture, as you can well imagine from the wording, but as relevant today, I feel, as in the lifetime of the woman who wrote when letter writing was a cultural and social necessity. Sei Shonagon was born in Japan in about the year 966 CE, and is remembered for writing a very whimsical collection of anecdotes, memories and irrelevancies which were not, she claimed, meant for publication.

For those of us prepared to look, learn and achieve something, nowhere is forever. There is a future for all of us, if we work at it, which is worth the time and the effort – just as letter writing is worthwhile compared to texting, in my opinion, as it brings a far more concentrated and dedicated message across. The world is changing, whether you can see it or not, and the need to communicate, to keep up with those changes, is stronger and more vital than ever. And if the only way to do that, to keep abreast of this changing world, is by the old-fashioned methods, then so be it. At least, for those who are prepared to look and consider their future. Some, sadly, knowing that it will be another six months until the air they breathe is different, do not bother. Others, tucked away for what might seem like a lifetime, make the best of what they have and advance themselves regardless.

Your profile had many words which caught my interest or, perhaps better, many interests which sparked my imagination. It also has one point which negates the whole, but it is a fairly minor one. Words which usually get me are linked to the humanities, so history, literature, philosophy and similar subjects tend to make me pause for a moment, and even consider possibilities. Not everyone knows how to use such words, some have them simply as an adornment – here we are re-entering the world of the fairy-tale scenario with a complementing mirror. Not everyone knows that you can lose yourself within words created from thought, as much as discover something from the past which not only fascinates, but inspires. Not everyone appreciates that you can advance a new train of thought by diverging from the ideas someone else has propounded – the path untrodden. And very few people understand that you can find, and exploit, that which you read, which you take on as knowledge, to not only advance yourself within yourself, but within a community of others who, spread across the world, never meet except through their written words, through the coming together of minds. These are the people who do not need to knock on the doors of those with a closed community, because they create their own and draw those of like interests to them, without forcing absolute obedience to a set of rules, or closing the doors to make a new elitist community where others can only look in. These are the people who have seen, and then turned to look elsewhere, and found what the closed mind has not imagined. And they are in all walks of life, all situations, all social environments. If you take the chance, turn, and look.

And the small downside? Your profile states that you do not wish or are unwilling to communicate with those outside the United States, so perhaps this attempt at starting a conversation will be merely a shout into the desert winds, and fade away. Then again, if we know our history, we also know that several intellectually stimulating individuals emerged from deserts (using desert in the broadest of terms) and influenced the world, in one way or another.