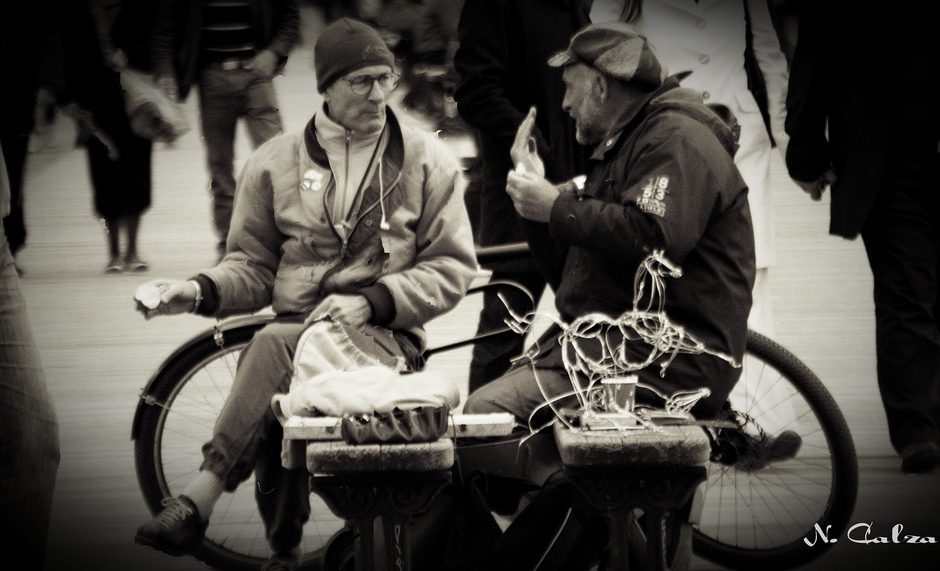 It is very hard for me to imagine any half-way successful educational system which does not include the humane arts. It may well be that such a system is graded according to the results achieved in examinations, but that cannot be the deciding factor. Most people can learn dates and numbers by heart, spewing them out again, without the need for any thought or consideration, but this learning is not going to assist them in real life. Possibly in the closed realms of the business world, but not in that special area which encompasses relationships, friendship, love, leisure. I have often been faced – sometimes by the same person – with a choice as far as work is concerned, regardless of the nature of that work. The first is that I am not paid to think, just to fulfil expectations and complete tasks. The second is always, when something doesn’t work out as planned, why I didn’t think it through first. There was a time, admittedly ending about 150 years ago, when working for a living was considered a lowly status, and thinking, planning, designing, researching, the highest good.

What happens when these students finish school or college and are released upon the world? Suddenly they are faced with problems which cannot be solved by Math, no matter how hard a certain television programme may try to convince us. There are also things which cannot be solved by tapping text messages into a smart phone, or copying the latest star of reality television or some popular soap opera. I am lucky in that I know people who are prepared to discuss and debate but, far more important, also listen. If we do not listen to what another person has to say, how can we form an informed opinion or craft an argument? If we do not know the very basics of the liberal arts, how can we know how to formulate our arguments to be most effective? How will we know how to instantly react to the visible signs other people give us over what is favourable and what not?

In many ways I think this is not an educational problem as much as a social one: we are being raised for a life of work where, for the mass, thinking is not only not a requirement but also, sometimes, a distinct disadvantage. Fewer and fewer have the chance to explore; their minds becoming the equivalent of a ten day tour of twelve European cities. They see what is shown on the main tourist routes, but have no opportunity to slip down a side street and discover how the world really works. And, yes, as you say, everything has to be quick so that we reach the pinnacle of achievement by the shortest route and in the shortest possible time. A consumer society where everything is fast food, whether it be for body or mind.

I am very fortunate in being able to take part in constructive argument talks and debates, where someone presents a short paper on a subject of their choice and those present, usually between fifteen and thirty people, discuss, add to, criticise according to their own opinion and experience. There are no interruptions, no shouting matches. Each lets it be known he has something to say and waits until it is his turn to speak. The idea is not to force an opinion but to explore the possibilities, even if no one, at the end of the evening, can say we have reached a hard and fast agreement. A further advantage we have, which promotes open discussion, is that nothing said is transmitted outside, which allows for very open and frank discussions.

I have long since moved away from television fodder. As you say, there is no real conversation or discussion partially because so few know how to discuss or even take time to research before an event, and all are scared of offending. Every single word must be clear and unambiguous so that the world of Twitter & Co. cannot rip you to pieces in real time. Conversation, in the media, is steered, planned to fit between advertising segments and according to the political leanings of the owner.

I have been trying to find real discussion of the various political stances, ploys, proposals made by individual candidates and party officials in the US election. What I find is not so much a pro-contra discussion, but always a very one-sided sermon on why something will or will not work or who will be the worse off if some things are enacted. I see the same-old, same-old about Climate Change, Affordable Care, welfare, tax, terrorism and religion. Different names, packaging, but the same content. Salman Rushdie has a wonderful line on new ideas:

What kind of an idea are you? Are you the kind that compromises, does deals, accommodates itself to society, aims to find a niche, to survive; or are you the cussed, bloody-minded, ramrod-backed type of damnfool notion that would rather break than sway with the breeze? – The kind that will almost certainly, ninety-nine times out of a hundred, be smashed to bits; but, the hundredth time, will change the world.

Perhaps constructive debate died out with Socrates and Parmenides, and only a fear of rejection or failure remains; a fear that the other could know more, persuade, and we will lose our place at the top.

Last year I welcomed a large group of Americans and Canadians for a weekend visit to our backwoods part of Germany. The men here for discussions and the women and children for pleasure – such things still happen. After a visit to Bremen one came up to me, absolutely stunned, having seen wedding decorations, openly on sale, featuring two men. I told her that such things are normal here, which seemed to shock her even more. The LGBT movement in the States, she told me, is so loud and demanding. A major cultural difference: in Germany people sat down together and discussed, explored, reached agreement. No need to demonstrate on the streets or through expensive advertising campaigns. Of course there are people who disagree, we have seen the Anti demonstrations in France, but that is also their Right. No one is stuffing their opinion down the throats of anyone else, whether it be over wedding cakes or public conveniences.

My monographs tend to be within the exceptionally broad areas of Freemasonry and Philosophy, or a combination of the two. Everything from the cave / light analogy in Plato’s Republic to the use of symbolism. They are fairly simple affairs with, sadly, small circulation, but fun to research and to write. Sometimes I wander into history, but always related to Masonry and Philosophy. My current interest is the first American Masonic Lodge in Germany, which was Chartered and Constituted considerably earlier than the official record shows.

For my catching up session this time: I have been reading books I promised myself I would read several decades ago. And cross reference reading from new titles into the much older works taken as references. So I shall be finishing Satanic Verses today and moving on to Sartre’s circle of friends / acquaintances. Whether I will also attempt those philosophers who influenced Sartre remains to be seen. I also have to prepare a talk on the Illuminati in light of a new publication on their rites and rituals for a public who know Dan Brown and nothing more than that and who, sadly, also believe that the Illuminati still exist in their original form, and that Elizabeth II is one of their leaders. I am sure Weißhaupt and Knigge would rotate in their graves at the idea of a female being associated with their short-lived association, let alone a high-ranking member.

Wishing well for your well-worn automobile.