I Was Never One For Hemingway 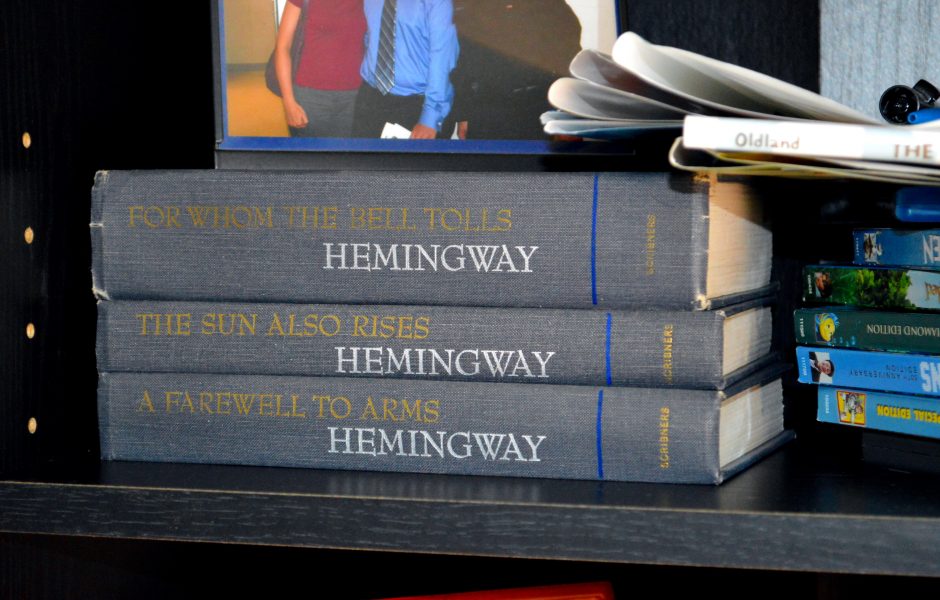 I’ll come straight out and say it the way it is: I was never one for Hemingway. For some reason his work has never appealed to me, although I will also admit to not having read a great deal of what he wrote during sober or not so sober moments. Shakespeare was one of the writers we were forced to read, forced to interpret, forced to accept as a Great in literature, rather than being introduced to his works and then allowed to work our own way in and appreciate. Had I not had the good fortune to work in a bookstore after leaving school, I would probably have followed the lead of many other school leavers of my generation, and never picked up a book again. Fortunately life takes many different turns for us all, providing we are prepared to see them, to take advantage of them, to wander away from the set path now and then, and take a few risks. I daresay I will come back to Hemingway in a few years time, when I have worked my way through all the other wonderful authors we are meant to have read, when I have delved into areas which are considered necessary, but far too expansive, too broad, for anyone, today, to cover adequately.

Hemingway isn’t the only one, of course, there are hundreds of authors who we do not read, or who are limited in their readership to those studying literature, literary history, or some other specialist subject within the massive swathe of publications available to us from around the world. We take our pick of who we wish to read, in which direction our literary fantasies may take us, and neglect everything outside this limited sphere. Worse, today there are few who can name authors considered to be classic, or masters of their craft, aside from the one or two they have studied at school. We are in a period of snippets, rather than real communication, taken over by the social media networks of the virtual world, and have no time to lose ourselves in the other worlds created for us, believing that this virtual world is the real one which we need, and which we must be a part of in order to count as something in society, within our circle of friends – virtual or otherwise.

All modern American literature comes from one book by Mark Twain

which suggests we all ought to read Twain – and especially Huckleberry Finn – to understand everyone who came after its publication, but still leaves the question of who, or what, influenced Twain? Hemingway brings us to one sharp point in the history of literature, and Twain, going back from him into the past, spreads that point out once more. Although, I must admit, I don’t agree that Twain is the father of modern American literature, since this tends to limit the genre to one very concise set of writings, and leaves out some exceptional authors – Baldwin and Ellison spring to mind.

My own reading is slightly different to that which was given us during our school years. Having returned to London, and been glad to have left the school I was in, I managed to find work as a bookseller – after a few experiments elsewhere – and spent about five years exploring all the literary possibilities before discovering that my real interest lie in philosophy and history. Now and then, when my mind is filled to overflowing with facts and figures, I will branch off briefly to another field, just to have something of a rest, and read some ‘brain candy’: a book which does not require too much energy to read and enjoy. At the moment I am finishing a crime thriller by Elizabeth George, before moving on to Ilona Jerger’s Und Marx stand still in Darwins garten followed by John Ruskin’s The Seven Lamps of Architecture. My favourite author at the moment, however, is Haruki Murakami, but that will undoubtedly change in the near future. There are so many good books, so many excellent writers, it is almost impossible to say one is better than another, or stick to one genre, one style of writing, even one category.

Indeed, life would be very boring if we all stuck to that which we know, that which we have been brought up with, and never take a chance with anything else. And this applies to so many things in life, not just books and literature, but where we live, who we socialise with, what we plan for the future. One of the smaller pleasures of life is being able to go out and find a restaurant to eat in which does not have the usual fare, which has items on the menu which are exotic or, better perhaps, simply unknown to us. We can’t all travel around the world and experience every single different form of society on the planet – except from the comfort of our favourite armchair with the box in the corner and a remote control – but we can enter part of a different worlds by wandering into a strange restaurant, and experiencing culinary delights.

This is something which has always disappointed me about certain parts of Europe, and I don’t just mean my mother country, or this adopted land, but throughout: the lack of willingness to experiment. That’s not to say there is none, that foreign tastes are not represented within all the major cities of this country, but the clientele is limited. It goes so far that some people will not go into a wine bar, because they have no idea which wine to order, and are not prepared to take a chance, to ask for advice, to try several different wines until they find that one which really pleases them. I used to go regularly to an Indian restaurant in a small town near here which, being in a small town, had to have a good selection of German dishes on the menu too, or it would have gone out of business very quickly indeed. And I heard people discussing the menu, and then opting for a German dish, simply because they did not know what the Indian one was, what it tasted like, and were not prepared to either ask, or take a chance and test it. I will also admit that I tend to cheat in this respect, and check out the recipes on the internet, even cooking some dishes at home first – or tasting wine in the quiet of my own living room – so that I can explore a professional’s attempts with a certain degree of knowledge.

I’ve never really been to the United States, meaning that I have been there, but not long enough to experience anything. A few years ago I was invited to Baltimore for a weekend visit, and had a chance to walk around the town – all areas of the city – and explore, but not enough to say that I know anything about the area, about the way of life, about American society. For that I rely on those who correspond with me, to bring their lives into my living room, and hope to be able to bring something of mine into theirs. Letter writing is one of those things forced upon us at school – at least, when I was at school it was – that has fallen by the wayside for many. Some wish to claim that social media is at fault, but the rot began long before the internet came to life, and there are now several networks which concentrate on communication through letter writing, even if those letters are published on a web site rather than being sent through the post. I began writing letters in the Eighties and have discovered that it is not just one of the great pleasures of life, but almost a way of life. Letter writing urges people to get out and explore, to think, to discover, and then to relate what they have seen and done to one single person. There are no Likes, no Favourites, no ReTweets along the way, just the pleasure of conversation over a longer period of time.

Not that the writing of letters has always been like this, it has a very long history – as I am sure you appreciate – but not one where only two people are involved. Back in the dark days before even the telephone was a spark in anyone’s eye, letter writing was the means of communication between families, groups and individuals which kept people together. Letters were shared, and written to be shared, not just within a family group, but among friends and acquaintances too. We could almost say that they were the earliest form of social networking, even if we – as the writer – didn’t get to see who was in our network, who had access to our letters, or get any form of feedback from them. For that we can be grateful to the first person who stuck a stick in a piece of clay and discovered that language could be communicated without shouting.

Having written this letter – by way of introduction more than anything else – I can only hope that I am sending it to the right address. Your address, on the postcard, was below the line – that is, right at the bottom of the card where the post office affixes its sorting codes – and obliterated by the black ink of a machine designed to send cards and letters down a certain channel, into a certain bag, and then on to the right destination by whatever means are available. Perhaps, this time, I will be lucky and this short missive will find its way to the correct address. We shall see.