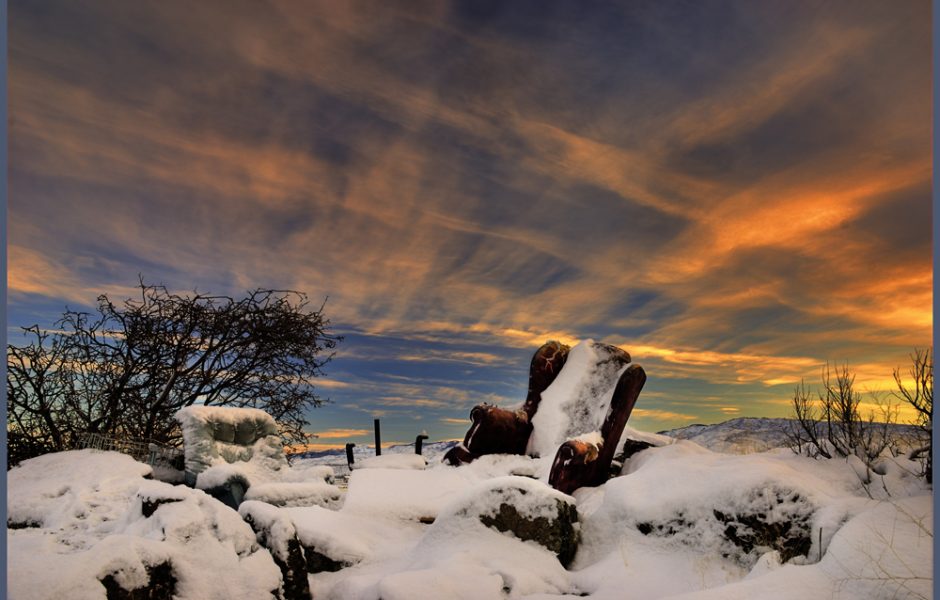 My first task of the day, after seeing to what the cat wanted with its incessant mewing, was to brush the remains of snow, from the sidewalk in front of my house, into the storm drain. We have some seemingly strange rules here in Germany, ones which catch a lot of people out when they first get here but, when you think about it, make some sense. One of these is that we keep the sidewalk in front of our property clean and safe to walk along, and if that means we need to get up half an hour earlier than usual to brush snow, then that is what we do. Although, it was hardly snow as we used to know it, more a white slush on top of a mess of semi-frozen water which would probably have vanished with the first traces of sunlight anyway. This has not be a snow-filled winter, up in the north, hardly even a cold one if you ignore the last few days. I  fact, almost every day but for three or four in the last week, when the temperatures dropped below the freezing point for a while, has been more like the first herald of spring than the last fighting signs of winter. I have seen photographs from people showing off their first snowdrops in gardens near here, although mine have not yet appeared, and cat has already started leaving more hair about the place than usual, as it begins the process of letting its winter fur disappear in the most awkward places, to be replaced by the finer summer fashions.

For my own part I am still wearing an extra layer of warm clothing whenever I venture out into the cold, as the wind seems to catch me just when I think I’m hitting a patch of warming sunlight, and each time I turn a corner. It seems to be colder walking the streets of this small town, getting my daily exercise, than it does wandering along the darkened promenade, alongside the fast flowing river. Here the wind cam spread itself out and play amongst the trees, across the surface of dark water, while in town it fights its way through the streets much as we do, and hastens around corners, between tall houses towering over tight streets, underneath and around parked cars. A take-out container of coffee, in this weather, would stay warm until the next street corner, if you’re lucky, and an oven-fresh bagel has no chance whatsoever.

And then I compare the winters I have experienced here in the last three or four years to those when I first arrived here, back in the late Eighties. Back then we had snow, and not just a light sprinkling of white slush which could be easily brushed off the sidewalk: real snow. It may have been slightly warmer during the winter months, which is all matter of perspective now as I have no figures, only my memories, but the snow was often two or three feet deep overnight, and fell in November, not a slight hint of what could be in mid-February. My first year here was one such winter. I came fresh out of Belfast, which had more rain than anything else, but some beautiful summers, and after just a few weeks had to get used to wrapping myself up over the ears to stay warm, as well as struggle along the streets in heavy footwear. The weather cycle may well be just as cold as it used to be, if not more so as it is often too cold for snow, but the timing has all changed; the start of spring comes in March after a sudden fall back into freezing weather, and our Autumn – your Fall – stretches out almost into mid-December which, with Christmas right around the corner and everyone speaking and singing about a white season, seems very odd indeed. The old rules about when you need to switch on the central heating have no meaning now: I turned mine on in late October for a while, had it off in parts of November and then back again, almost full power, at the beginning of December. For a week in January the automatic temperature control switch the whole thing off, it was so warm, and now we are back with heated air all around me, and a need to get out to breathe something fresh and crisp as often as possible.

I was thinking about this change in our surroundings, which is clear and obvious whether people wish to accept it or not, and remembered my many nights freezing cold in the desert in Saudi Arabia. Which got me thinking, because no one imagines a desert to be cold, although once the warming sun has gone down and when there are no clouds to cover the night sky, moist deserts are considerably colder than anyone might expect. I came across a report, back in December 2016, that the photographer Karim Bouchetata had captured images of snow fall in the Algerian town of Ain Sefra, which lies on the northern side of the Sahara desert. Then, this year, another report that for only the third time in forty years, snow has fallen in the same area. The snow fall in 2016 was reported as being the first time in forty years, so I must have missed a report from last year, or the news media considered it hardly worth mentioning, two years on the go. What was once new is very quickly old when it repeats itself too often. But the report this year spoke of over fifteen inches of snow, and that is a lot for a desert. I remember being in Central America too, and a temperature drop to a level where we would still have been hot and wandering about in short sleeves caused us, acclimatised as we were, to feel the cold and reach for a pullover to stop the shivering.

It would be strange for me, but perhaps an everyday thing for my grandchildren, to think of a winter wonderland between Libya and Saudi Arabia, or across the warmest parts of South Africa, but we seem to be going in that direction. It has always been my plan to ‘winter’ in Australia, where Christmas is celebrated with a barbecue on the beach, in shorts, and skinny dipping afterwards for those brave or drunk enough to take the plunge.

As the world that we see and live in changes, so do the people who live here. Which countries will be seen as civilised one hundred years for now? Which will be the military dictatorships, and which the governments going out of their way to help the poor and needy, the refugees from famine and war? It seems strange, today, to imagine that things could change so much over the coming century, or even a shorter period of time, that what we know of freedom and democracy is that which future lands celebrate, and ours have left behind. Part of my thoughts in this direction has been influenced by cultural and political changes which we see in the United States of America, the United Kingdom and Europe, and partially through the knowledge that artificial intelligence, the root generation – you might almost say – is coming towards us at an ever-increasing speed. There was talk of the leisure classes back in the Eighties, of having to change the work ethic and the manner in which we set up and lives our lives. Little came of these thoughts as no one took them seriously, but people lost their jobs to automation all the same. And now there is the same talk, and the descendents of those people who laughed it off then – in a political sense – are doing the same now. No preparations for what is, for some, inevitable.

Will we see more people like me, content at home with a set of hobbies and a reasonable but not overwhelming income? Or will we see the scramble for the last few jobs, a cut back on wages because there are so many applicants willing to just work for anything, and no preparation by society or the government? Sadly I tend towards the second thought, that it will be left until too late and the masses will suffer. I see that in many advanced societies today poverty is on the increase, and government blames those who have been forced out of work, out of their homes through government policy, rather than accepting that they are wrong and working, with and for the people, to remedy the errors. It is said, almost in every generation, that we live in interesting and historical times: let us hope that these times are not the precursor to the end of civilisation, to a time when the Australian Mad Max is what is normal, and life is a fight for survival. We had the survival of the fittest at the beginning of time, we hardly need it again now when, in theory, we are far more intelligent and adaptable.

What will the future bring with it? I sometimes get the impression it will be less in tune with society, with social life, and more with isolation and loneliness. Being lonely in the middle of a crowd, as everyone else consults their technologically advanced means of communication, and forgets the wonders of talking to someone, sitting across a table, drinking coffee, playing a real game of hands-on chess or draughts, rather than staring down at the small screen, waiting for a message, typing a short, abbreviated, answer.

For you and me it is different, as for many other people where distance is involved. But those who live in the same town and cannot be bothered to shift off their couch, who are forgetting how to talk to one another, how to laugh freely, how to enjoy their surroundings: I feel sorry for their loss, even though they do not appreciate the loss themselves. We are gradually moving away from everything that made modern society great, and back into the caveman times of small groups, foraging for whatever is needed, lacking in communicative skills, obsessed with themselves and nothing else. Will they even appreciate their loneliness, as we do ours, and work to combat it? Only time will tell.