If You Are Afraid Of Loneliness, Don’t Marry 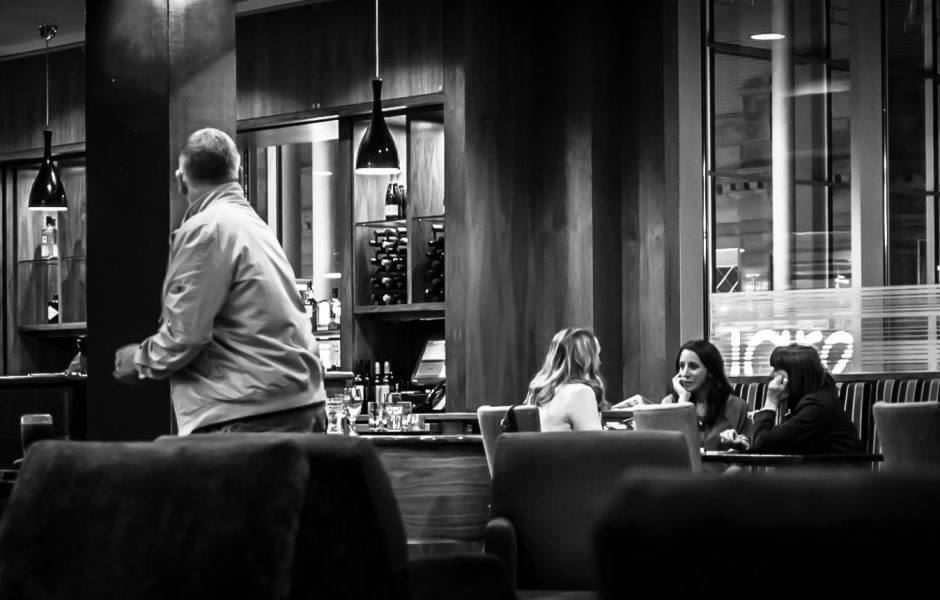 The things two people have in common tend to make them as interesting to one another as the many interests that seem to diverge and to separate them, push them apart, on the surface at least. We often seek out those who we can relate to, those who have similar interests, experiences, a life-style that we have followed ourselves, and frequently that means people within our own environment, social circle or age group. We search out people who we can communicate with on the same level, within the same subjects first, because this is where we feel comfortable: there are clear cut borders we do not cross; experiences are much the same; we can compare and relate without having to strain ourselves or dig deeper into our thoughts, form opinions, step over the edge and stride away from our comfort zone. Later in life, when all the conversations have dried up, as we realise that everything we say has been said, everything we discuss has been debated or covered many times and is always the same, the realisation that there is more to life than what we know hits us like a ton of bricks, and we see that there is something of life outside the clearly defined borders we have protected all our lives, away from the comforts of home and the slow, unchanging steadfastness of our ordered lives. Anton Chekov managed to sum this feeling up very succinctly indeed as:

If you are afraid of loneliness, don’t marry.

Not that there is any reason to suggest such an institution as marriage is a bad thing, but people tend to marry those who are similar to themselves because they feel comfortable together, and then bond until there is almost no difference between the two of them. In the best possible cases, I am led to believe. And there, as in any relationship, things settle down and become routine and, eventually, the boredom of same-old same-old settles in, and we simply move from one day to another without raising our eyes from the routine, from the usual, from within the borders of our perceived comfort zone.

And then there are people like you and I who, young in years, take a chance and set out to experience something new, something strange, something unusual. We remove ourselves from the safety of what we know, what we have known all our lives, and set out on a journey of discovery. We are, however, very different to one another: my journey began many years ago when I left England, and your journey is (almost) right at the start as you arrive in Ireland. Not that my journey is at an end, although I have settled and found myself a home, I wouldn’t want anyone to think that, as such thoughts are like a death sentence: give up all hope those who enter this age group, there is nothing more than what you have already experienced. Or, to take a more classical stance, and in the words of Publius Terentius Afer – better known today as Terence – writing in The Self-Tormentor:

[Let me] offer you a bold piece of advice, person to person, to the effect that you seem to me to be behaving inappropriately for your years and for the requirements of your circumstances. In the name of gods and men, what are you up to? What are you trying to achieve? You’re sixty years of age, or more, at a guess.

But clearly the same thoughts have entered my mind as have entered yours, although they came to me decades ago and I am merely following on as if there is always something new to be found, and we are both (still, in my case) looking over the fence to see what is on the other side, what there is of interest, how we can expand our knowledge through conversation, the experiences of other people, for which, I must admit, letter writing is an ideal medium to choose. We all get hit with the realisation that there is more at some stage in our lives, sometimes as a slippery thought which insinuates itself into our minds, sometimes as a flash of lightning, an awakening, a revelation:

And suddenly I found myself thinking, Do they come to bury the others or to be entombed, to give life or to receive it? Do the others see them, think about them, even those standing close enough to speak? And if they spoke back, would the impatient businessmen in conventional suits and tired housewives with their plunder, understand? What would they say?

Such a revelation, as seen by Ralph Ellison in the brilliant work Invisible Man, would not hit all of us like a train crash, I am sure, and would hardly make us turn to the individual sitting in the next seat and begin a conversation – although I have experienced exactly this recently, where a conversation piece with someone else was so interesting, apparently, that those at the next table just had to join in and share their thoughts. Amusing, in this case, as I was sitting with my partner outside an Irish pub in Bremen, describing the virtues of a well-poured stout, of all things.

This might seem like a very strange way of introducing myself but, at the same time, there can be no better introduction than a showing of thoughts and interests without the burdensome checking to see whether anything is acceptable, conversational, of the right intellectual level which occurs in personal conversations. Not, you understand, that I am against such conversation, but this is hardly a first date – and that is a good thing too – and it is very one-sided. I get to write what I wish to say without fear of interruption, one of the greatest advantages of letter writing – and you get to do the same or, another advantage, simply turn away and leave the whole mess alone! You write, in your short introduction, of life experiences and philosophy, of different interests, and I do believe that we, along with the similarities we have despite our age differences, can find many ways to explore these areas.

You write that you enjoy reading, a rare attribute today, but definitely one to be lauded. I often sit with a book in a street café and allow the words of someone gifted to flow through my brain and body while, often unseen by myself but commented upon by friends, people look askance. Where once scrolling through the entries on Twitter, Facebook, Instagram and all the other (back then) fledgling social networks was considered strange, today it is the old-fashioned, outmoded act of reading a set of bound paper pages. I suspect our reading spheres of interest would also be different – which is a great advantage – with mine, as you can see, tending toward classics, classic literature, biography and philosophy. Now and then I allow myself a brief respite, what I call “brain-candy”, and speed through a Lee Child or Elizabeth George just to allow my brain to visualize something else for a change.

Recent titles which I have read, and mostly enjoyed: Kate Kirkpatrick’s Becoming Beauvoir: A Life, Sally Mann’s Hold Still: A Memoir with Photographs and Pamela Bannos’ Vivian Maier: A Photographer’s Life and Afterlife. Probably not titles that many people would recognise, certainly as far as Vivian Maier is concerned, and possibly Sally Mann too, but interesting. Life experiences of lives which cannot be personally lived, from people who one can never meet – although Sally Mann is still alive, at least.

I’m hard put to find fiction titles that I’ve read recently, most would probably be classified as classics now, authored by such people as Ralph Ellison, John Masters, Han Suyin and similar. Names which meant a great deal when I was young, and before my time too, but have disappeared into the area of collector’s favourites and university course compulsory reading lists now. I sometimes find such works, here in Germany, when wandering through flea markets – although I am not searching for books, but photographs – and pick them up in the hope that they will be worth the few cents I shell out, and not fall apart from age before I get them back home. Mainly it is the old Penguin titles which I pick up, because they are so obvious with their bold coloured covers, and also, perhaps, out of a sense of guilt. I inherited a vast collection of Penguin crime books, all with the distinctive green covers from the late Fifties and Sixties, and made the mistake of allowing them to be taken by other people, never to be returned.

Not, I have to admit, my first piece of guilt when it comes to books. In about 1982 I sold a first edition copy, in excellent condition, of George MacDonald’s At the Back of the North Wind (1872), and can still see the man who bought it, riding away from the flea market stall I had at that time, near King’s Cross, with the book haphazardly fixed onto the rack at the back of his bicycle. It is a strange form of guilt as it makes no tangible sense, except in a material world. Maybe ten years ago I saw another copy of the same title, same date, same condition, on offer for over four thousand pounds. I struggled to understand why my guilt should exist merely because the work was worth so much on the open market, rather than because I had parted with an excellent book. But those were the days when I was selling off all of my books – my first library, I like to remind myself – and preparing for a new life in a new world. I couldn’t take them with me, I couldn’t leave them behind; new homes had to be found. And those that did not sell, that found no Forever Home, as such places are termed today, remained in tea chests in the basement passage of a local public house, facing their fate as orphans without me.

And I left London, where I had lived practically my whole life – if you don’t count six years of boarding school in the depths of North Yorkshire – and embarked on a new phase, as you did two years ago. New surroundings, new culture, and a new language.

But that is, perhaps, something for a later letter, should you decide that you’re willing to chance a long and involved written conversation with an old man over life’s experiences in new worlds. I regret the fact that I type my letters these days, one of the worst side-effects of age, but I am still capable of thinking, of putting words down on paper, of holding the book I wish to read and not spilling my coffee during any of the exciting passages. Although, I do not doubt that you’ve had plenty of replies to your search for letter writing contacts, since it is always much easier for a young woman to find those with willing pens and myriad thoughts, than for an old man. Simone de Beauvoir in The Mandarins:

If others don’t count, it’s meaningless to write. But if they do count, it’s wonderful to gain their friendship and confidence with words; it’s magnificent to hear your own thoughts echoed in them.