I Could Still Enjoy Its Beauty 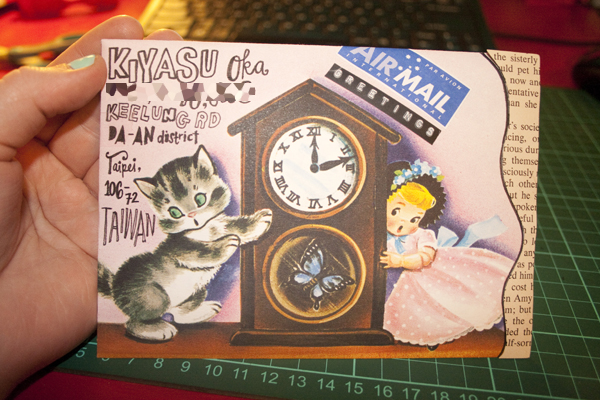 This is something of a first for me, not the writing of a letter which is second nature, and something I have been doing almost since I could hold a pen in my hand, but writing to someone I do not know through a quick correspondence on Twitter. A surprise, I admit, because the same happened yesterday, with a young man out of Los Angeles in the United States who was playing around a touch, who I challenged, and who then sent me his address – or one belonging to a friend – almost as a challenge to see whether I would come through. Not that I have any worries about the means or the ways; it is fascinating to be able to write to people around the world and, when they reply, to gain an insight into their world, their culture and lifestyle, something that Twitter and all the other social media web sites are incapable of inducing. Letter writing is a very intimate and personal experience, usually directly one person to another these days, although it used to be different. Right into the beginning of last century people would write to one another, and then share the letters with friends and relatives, even with ones the original writer might not have known. Nowadays we share our entire lives, or that which we are prepared to admit to, on the internet and absolutely anyone, good or bad, male or female, young or old, can see it as they wish.

In some ways this is a pleasant advance, the ability to share and to take part with a wide range of people around the globe but, at the same time, we lose something of the personal side of things by being so open, by writing for the masses. Everyone wants to have more and more followers, as if they really are friends, and the numbers game becomes more important than the news we really wish to share, the personal feeling attained by sharing and gaining replies. But I much prefer the chance to just talk freely, without having to limit yourself to a set number of characters or words, and without worrying about who else is going to be reading my words and jumping in on the conversation. There is always going to be something special about the post being delivered, and being able to hold a physical letter in your hands which is addressed to no one else but you, and which you can keep far longer than the memory of a Tweet or a status update on Facebook. Perhaps this is one of the reasons why this wonderful art of letter writing has never really died out, why people keep on coming back to it down the years, whether as younger people or in old age, and re-living the memories or kindling new ones.

You mentioned in one of your messages, as I was writing this, the idea of me sending you a copy of the letter as a picture, writing:

In case, if it’s not sent, I could still enjoy its beauty

which I thought a wonderful expression of letter writing, and which follows on pretty much from my own feelings about letters, about the physical piece of paper and the writing as much as the message coming across. Although, when you look at this letter now, I am sure that you see it is a fairly ordinary thing, with no embellishments, no pretty pictures, just a whole string of words one following the other across the page and ever onwards. Perhaps the stamp will be interesting, although not everyone is inspired by cars. The more interesting stamps seem to be those for local post, and not international, perhaps because there are more local sold and the post office can afford the better designs.

For me, letter writing is not just about putting words down on paper, but about being able to communicate across the globe, from one end of the earth to another, and into a realm that, for many, defies imagination. Words can turn into visions of what a different country, even a different town or village, is like, and enlighten, to a certain extent. We do, of course, have television and the internet for those who wish to surf the channels, but it is so much more enjoyable when there is a personal touch, when someone is there who can answer questions, give descriptions, bring a different world to light and to life.

Often, when ascending the loftiest summits far above the Clouds, I beheld with a species of gloomy delight, the ranges and tiers beneath my feet, appearing like the waves of the mighty ocean troubled and agitated when the gale sweeps furiously lover its surface. Then terrific desolation around me as far as the eye could reach in the Horizon struck the mind with inconceivable awe and astonishment, but alas! I had no one y me who could participate in my feelings.

The words of Jorgen Jorgenson, a wonderful character who explored, governed, was criminalised, pardoned and had a fascinating life which, fortunately for us, he passed on through a few letters and through other things left behind. Imagine seeing the most beautiful sights in the world, and having no one you can tell. Imagine too, which is just as easy, seeing something every day in your life which people in other countries will never experience, and being able to pass it on, to build a picture, to create a new world in someone else’s imagination. Admittedly this is mainly what authors of romantic novels attempt to do, or those who create fantasy worlds of witches and wizards, but we can do it too; for us, our world is different, often unimaginable, to someone else.

I live in a small town of nearly five thousand people, straddling across the fast-flowing river Weser in northern Germany, which is a far cry from my origins. The town is quiet and peaceful, often visited by tourists who are just passing through on their way to a larger town, but they stop and drink a cup of coffee, eat a slice of cake and enjoy the view before moving on. Some ride their bicycles through quickly, as if they have to complete a certain distance for their day to have been worthwhile, and I feel sorry for them as they miss so much of real interest. Some travel through in their cars, towing a caravan behind them, and settle down at camp sites, packed full with other people in their caravans and gaining no peace and quiet whatsoever. When I go out, I walk. Sometimes I take the car and travel across country to somewhere of interest, then leave it in a car park on the outskirts of town and wander, free from worries over parking and traffic jams, through the area exploring. This is much the same as letter writing, believe it or not: looking; experiencing; learning all at a gentle pace, with no cares or worries in the world, just taking your time.

And then being able to share the experience with other people. I know, there is Facebook and Instagram and all the other social media web sites where you can upload photographs and pull funny faces to show everyone one you know – and many people you do not – that you are alive and really in a certain place, but it isn’t the same. To be able to sit down, relaxed, a recount the events of the day at leisure, in a letter or in a journal, is a fitting end to events. Not everyone can travel, not everyone can be there with you, and very few people can really imagine what a place is like if you just write one hundred and forty characters on your timeline and leave it at that. But a long, gentle description of a church, a town hall, a market, filled with details and little notes works wonders. Especially since those receiving your missive are going to be able to hold it, to read it at all times, to share it with others and not worry that ever newer updates are going to push it off the screen, assign it to the archives, never to be found again.

At present, in my part of northern Germany, we are enjoying a series of storms; nothing serious at the moment, but thunder and lightning and massive downpours of rain seem to be governing our day, rather than the hot sunshine and occasional cool breezes of early summer. I am sitting with my back to the windows, and can hear the wind tearing through nearby trees, sense the pressure of the air around me. Now and then a stronger gust will cause a window pane to shudder; now and then there will be a crack of thunder way off in the distance. My neighbour has been cutting wood ready for his winter stove but, apart from that, there is not a sound above that of my writing.

I was born in London. The noises, the feelings, the very smell of the city are completely different, and that’s without taking traffic and people into consideration. The rush and hustle of the big city is something that follows you all your life; there are some who cannot do without it, but I’m glad to have left it all behind. The city is wonderful, to visit, but I don’t think I’d want to live in one again. Here my small house is well protected from the noise of passing cars, although I occasionally hear the motor, even the horn, of a cargo ship moving up the river towards one of the quarries or back towards their final destination. Even the dust here seems to be different from that in the city; not as cloying, not as dirty even, if that could be possible. But when it rains, the dust simply gets moved from one part of the street to another, changing the landscape a little each time. And the tourists, sheltering with a cup of coffee at one of the local cafés, watch and wait and then, when it is clear and dry once more, pack themselves back onto their bicycles and ride further on along their holiday routes. Perhaps, along that route, they’ll send a postcard to someone, perhaps just take a single photograph, and the memories of the day will fade into nothing, or move, like the dust, to create a new landscape.