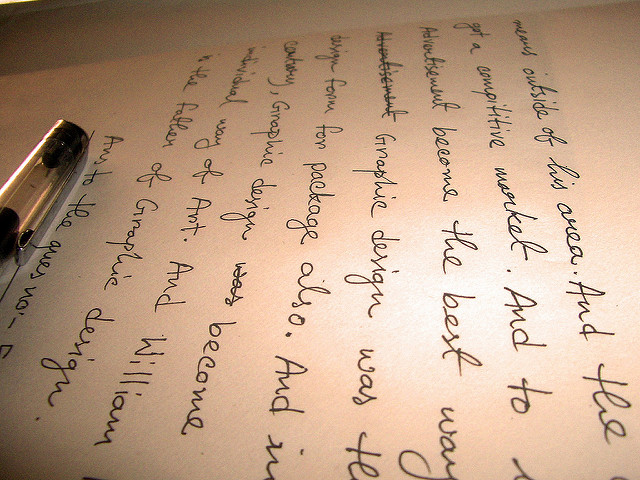 Starting a letter, for the writer, is probably the hardest part of all. My mind is filled to overflowing with ideas about what to write, how to introduce myself, but the blank sheet of paper is still a challenge, something which has to be overcome. This, to my way of thinking, is a good thing; as a writer I can concentrate more, form my thoughts into a coherent mass from the jumble in my mind and make some sort of plan about how I wish to proceed, how I wish to fill the empty lines. Sometimes age has its advantages and, while each new letter, each blank sheet of paper, remains a challenge, it is one that I know I can overcome simply from experience. Much harder, as I am sure you appreciate, is writing a story or even a book, both of which need far more concentration, a detailed plan and a good portion of dedication. In my letters I am writing to, and for, one person. Putting together a tale for publication means I am writing, potentially, for thousands of readers, all of whom have different lives, individual ideas and a wide range of desires.

Perhaps it is precisely these differences which make both forms of writing so much more fun and, at the same time, frustrating. I read back over letters before sending them and see the mistakes, all the ideas which I wanted to commit to paper, and know they will have to wait until the next letter to be corrected or included. Since all of my letters are hand written, it is impossible to go back and correct or to add, without creating such a mess that the whole is illegible. Not that my letters aren’t a mess anyway, with this scrawl I fondly refer to as hand writing, but I have seen considerably worse example, and undoubtedly produced a few myself.

My father was a graphic designer and my grandfather a school teacher and, later in life, school principal. All the museums and exhibitions I visited were not through their influence but purely through my own interest, and the need to find something to do during the school vacations. I was born and raised in London, but went to school in a small village in North Yorkshire. Staying at home was unheard of; free time had to be spent doing something and, since my father was always working, that meant doing things on my own. The idea – or custom – of sitting in front of a television set or playing video games didn’t exist. If the weather was good, I was expected to be outside, away from home. If the weather was bad we had puzzles to put together, books to read, but certainly no television.

Going back to school at the end of each vacation, since it was a boarding school and several hundred miles away from London, was like being sent into solitary confinement, at least that’s the way I saw it then. Today I would rate it as being much worse, since the confinement was with people, including the teachers, very set in their ways and with no interest in furthering student’s education beyond what was in the text books. Each Monday I would receive a typed letter from home, and now and then I would reply.

The museums in London, and the many art galleries, were an enthralling way to spend free time. I would beg the fare for the Underground as pocket-money and then travel across the city to the National History, Science or Victoria and Albert museums which, back then, had no entrance fee. The latter was by far my favourite because of the constantly changing exhibits and the diversity of their exhibitions. I used to dream of being able to produce such beautiful works of art, especially intricate wood carvings, but knew that my own talents went in a different direction. The written word has always been my main love, the greater attraction. There is always a story running through my mind, forming itself, waiting to be put down on paper. Perhaps it is one of the reasons why I helped form the small press publishing company I now direct, not so much the chance to write as a real opportunity to find works worth publishing for other people to read.

And now, having traveled extensively around the world, I am back in a small town which has little by way of art or literature to offer, but is close enough to three major cities – Bremen, Hamburg and Hannover – that it doesn’t matter too much. I envy your chance to see and learn so much with someone who shares the same interests, and especially someone who helps you to explore and cultivate your talent. Baudelaire wrote:

Many a flower, alas, was meant
To spread the fragrance of its scent
In secret solitude, unknown.

I can well imagine this referring to the many, and potentially great, women who wrote or painted, sculpted and traveled or explored and did not gain the recognition which should have been their right. But for private publishing or the use of a male name. we would know even fewer than we already do. We’ve seen so many advances in the last one hundred years, as far as equality and equal chances are concerned, but still have a long way to go, still have many obstacles – old establishment prejudices – in the way.

Age, as you wrote, makes no difference whatsoever. The chance to converse, to learn, to experience all that life has to offer, even when it is second-hand or through the eyes of someone else, is what should guide us, or what should push us forwards. We live in completely different worlds, as far as customs and surroundings are concerned. Our daily lives have similarities, but are led by our surroundings, by the people we meet and interact with on a daily basis and, of course, by history.

When I was fourteen I made my first trip, alone, to a foreign country. In the summer vacation I said I was going to stay with my grandparents, and told them I was staying in London, and made my way to Paris. The very first thing that I noticed, which threw much of the one-sided education I had received up until then on its head, was that the French looked and acted, aside from their language, exactly the same as we did. Part of my education involved the patriotic idea that the English – not the British – were and are far superior to all other nationalities, and that the loss of Empire was one of the greatest mistakes these sub-humans had ever made. We were never explicitly taught this, but the thought underlay almost everything, and especially history and politics. To wander around the streets of Paris, visit their museums and see the ordinary people going about their lives in exactly the same way as we do was a real eye-opener. Added to which, Paris is a beautiful city as well as a city of contrasts. It has its bad areas the same as every other city around the world, and its art, markets, buildings and parks.

My trip to France taught me not to simply accept what other people say – or teach – at face value, but to look, to explore and experience for myself. I am sure that, as an artist, you understand what I mean. A writer cannot write about something he or she cannot visualise; an artist cannot depict a place or an event which does not form before their mind’s eye.

Were you hit with winter storms and snow last week? I had almost given up on winter, and then our winter has still been a disappointment. We had snow, but not a great mass, more freezing cold temperatures for a week and that was it. Now the rain is back, the streets have been washed clean and, as I write, the wind howls around the houses. In my first winter in Germany, in the mid-Eighties, we had over two feet of snow. I cannot remember there being as much snow on the ground here since then, but I haven’t been in Germany every winter. One year I was in Belize, another in Bosnia, a third in Saudi Arabia.

You have thirty sketchbooks packed with memories and experiences, and I am just about to start the fortieth volume of my diary. I think it is wonderful to have a horde of memories in one form or another, but better not just saved on a cell phone or on Facebook. So many things disappear as technology changes, but the memories we have consigned to paper remain. Letter writing, the printed book and so many other aspects of a normal, social life have been declared dead and gone so many times, but they remain, and it is the new technology which vanishes. One of my hobbies is collecting old photographs – and cameras too – which seem easier to find than new photographs. Admittedly I have to traipse around the flea markets to find them, which is an enjoyable pastime too, but they are still there. And when I ask someone about the pictures they shot last year? Gone. The computer broke, they have a new phone, moved house, updated their computer software. Worse still is when all their memories have been uploaded to an online service, and it goes bankrupt. Technology is a wonderful thing, no doubt about it, but very over rated in my opinion. No matter what the future brings, I will still go out and buy my milk and local newspaper from the shop on the corner, rather than letting Amazon deliver with a drone.

Where have all the friendships, the personal conversations gone? If we rely on technology it won’t be long until we no longer talk to one another, until our social circles communicate exclusively with abbreviations and emoticons, quite aside from the fact, as I read recently, that most Facebook friends are either fake, or people we have never met, never will meet. I think I would much rather stick to the old ways and use my ink pen to write, my mouth to converse and, I believe, life will be much better as a result. Of course we cannot ignore technological advances, but they should never be allowed to direct the course of our lives. There is a special feeling, holding and reading a letter someone has written just for you, which email and text messages will never be able to replace.

Much the same with books: I cannot imagine reading a book which has not been printed on paper. Perhaps I am old-fashioned in this respect, but if that is so, then I am happy to accept it. Perhaps you will let me read something you have written, and I offer a small token from a very good friend of mine which we published a while ago. And, more than that, I look forward to your first letter, in the hope that the challenge of reading my terrible hand writing hasn’t put you off the idea.